"Out of Office" Work 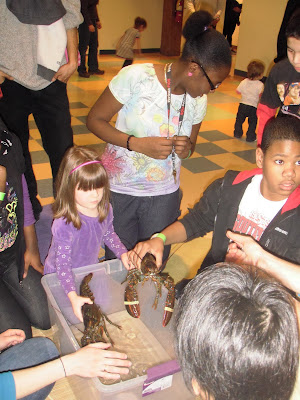 As an intern with SHSB since January, I haven’t had a whole lot of out-of-the-office work given the winter we’ve had here in Boston. In fact, today was my first venture out of SHSB’s office, right into the chaotic throngs of children on February vacation in one of the most popular places for kids in the city – the Boston Children’s Museum. But first, we had to stop by the James Hook and Company’s building to borrow two lobsters, two clams, and an oyster for the day. Then it was off to the museum where for two hours we used the lobsters to entertain scores of eager and energetic kids. We also taught them about the basic anatomy and adaptations of the sea creatures. 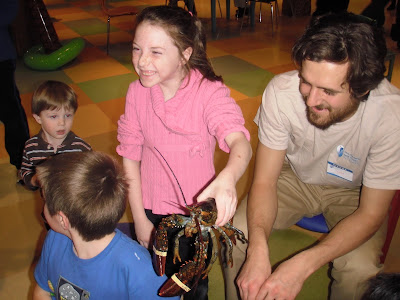 While many of the young vacationers were eager to pick up and hold the animals and pose for photographs, there were quite a few who preferred to lightly touch a lobster’s tail or hold an oyster, while there were even still a few who were completely shocked by the sight of a real live lobster. The questions were plentiful: “Are they real?” “Will it hurt if I pick it up?” “Is it friendly?” “Where did it come from?” And the observations and comments were noteworthy too: “I’m holding a lobster! I’m holding a lobster!” “This lobster doesn’t scare me because he’s friendly!” “Dude! There’s no way I’m touching that thing!”
After a couple hours, when the crowds had dissipated, we packed up the lobsters, clams, and oyster, and said goodbye. While my time here as an intern will end before the summer education programs begin, I appreciated having the opportunity to see SHSB in action spreading knowledge and appreciation of sea creatures and helping kids receive the most out of their vacation from school 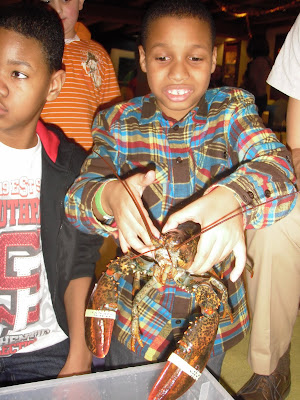 .
John Gioia
Policy Intern
Save the Harbor / Save the Bay
at 5:43 PM

When Save the Harbor/Save the Bay’s Board of Directors appointed me Executive Director in April, I was proud to take the job, though I ...