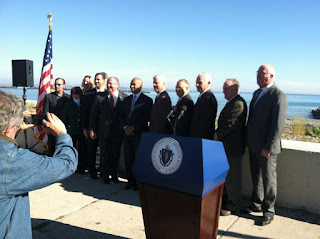 The $17 million project will take about two years to complete, and will add lighting, benches, repair the sea wall and bring more sand to the beach. In addition to improving the experience for beach-goers, it will provide a measure of protection from storms and coastal erosion to the adjacent neighborhood on Winthrop Shore Drive. 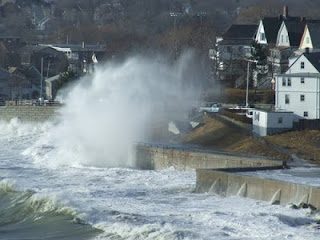 It will also bring residents and visitors back to this great beach, which is known for its great views, spectacular surf, and Shelby Scott's storm coverage!

Here at Save the Harbor we can''t wait for phase three, and are confident that Winthrop Beach will once again be a destination where residents and visitors alike can enjoy the sea, sky and SAND!

Speaker DeLeo and Senator Petruccelli have both been tenacious advocates for the region's public beaches and this project, which was a key recommendation  of the Metropolitan Beaches Commission's 2007 report "Beaches We Can Be Proud To Use",  prepared in partnership with Save the Harbor / Save the Bay.


In 2013,  the Metropolitan Beaches Commission, Co-Chaired by Sen. Jack Hart and Rep Kathi-Anne, will convene a series of public hearings in beachfront communities from Nahant to Nantasket to evaluate the improvements to the Boston Harbor Region's public beaches from Nahant to Nantasket. When the hearings are finished, they will make recommendations on the next round of public investment in clean water and better beaches. We hope to see you there!

So thanks again to Governor Patrick, Speaker DeLeo, Senator Petruccelli and the many other state and local officials and residents who helped make this project happen - for their patient and effective advocacy for Winthrop Beach and our region's waterfront neighborhoods and beachfront communities!

You can find out more about the event and the project in this press release.

See you on the beach!

Bruce Berman
Save the Harbor / Save the Bay
at 7:22 AM