Just 25 years ago, Boston Harbor was a national disgrace, as our waste washed up on the beach and shore from Cape Cod to Cape Ann. Working together we changed all that.

None of this would be possible without the hard work and dedication of thousands of people who each believed in the power of Boston Harbor to change lives and transform communities.

During our 25th anniversary in 2011, Save the Harbor established an annual tradition of recognizing  Boston Harbor Heroes (http://www.savetheharbor.org/heroes/) for their extraordinary commitment to the harbor we have worked so hard to restore and protect at our annual corporate gala, "Destination Boston Harbor"


The 2012 Harbor Heroes included Lowell Richards of MASSPORT, Professor Charles Haar of Harvard University, Harold Sparrow of the YMCA of Greater Boston, Ronda Ivy McLeod of JetBlue Airways, and Will Clark, Co-Chair of Save the Harbor's Youth Committee.

On Thursday, March 28, Save the Harbor/Save the Bay honored six new Boston Harbor Heroes at their Destination Boston Harbor gala event at the InterContinental Hotel. They were recognized for their extraordinary commitment to Boston Harbor’s revitalization, its future, and its impact on the community.

Carol Churchill, of Distragas GDF/Suez - For her support of efforts to connect the region's youth and teens to Boston Harbor and the Boston Harbor Islands.

Karrisha Gillespie - For her extraordinary work to share the harbor with young people from every neighborhood in the city as a Boston Harbor explorer.

Carol Haney - For her leadership in the restoration and revitalization of Revere Beach.

Jack Hart - For his leadership as a State Senator and Chairman of the Metropolitan Beaches Commission in restoring the region's public beaches from Nahant to Nantasket, and making the beaches of South Boston some of the cleanest urban beaches in America.

Timothy Kirwin - For his generosity and the work he has done to strengthen the harbor and the city by helping to transform the Fort Point Channel into a destination for residents and visitors alike.

Dr. Andrea Rex - For making sure that all of us have the facts we need to make good decisions, and for insisting that good policy be based on good data and sound science. 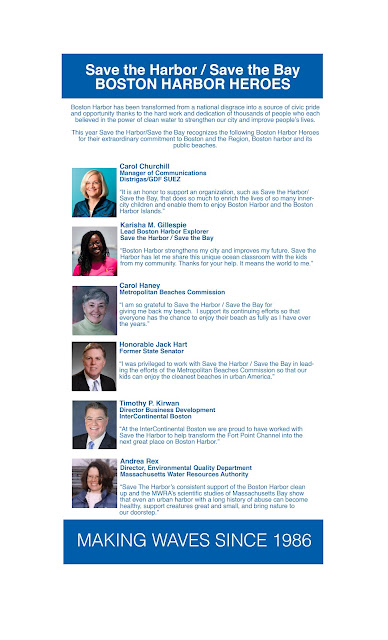 Thanks to them, and to all Boston Harbor Heroes!