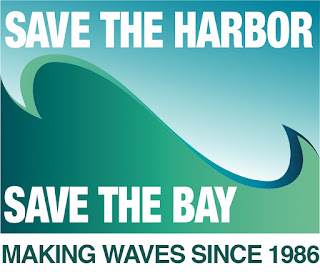 On Memorial Day weekend, 2013 Save the Harbor / Save the Bay released its second annual Beaches Water Quality Report Card on the Boston Harbor Region’s public beaches from Nahant to Nantasket that are managed by the Department of Conservation and Recreation (DCR).

The report card is based on an in-depth analysis of thousands of samples taken by the DCR and the Massachusetts Water Resources Authority (MWRA) in 2012. The samples were collected at 34 testing sites on public beaches in 9 communities including Nahant, Lynn, Revere, Winthrop, East Boston, South Boston, Dorchester, Quincy and Hull.

The report card is based on methodology developed by the Save the Harbor/Save the Bay’s Beaches Science Advisory Committee (BSAC), Co-Chaired by Dr. Judy Pederson of MIT’s Sea Grant Program and Dr. Jim Shine of the Harvard School of Public Health.

Here is a snapshot of the results. 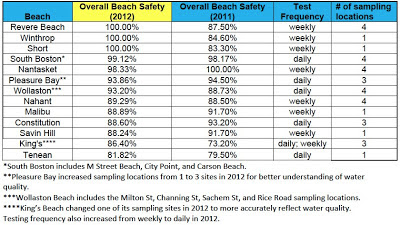 “2012 was a good year for most of the Boston Harbor region’s public beaches, with more than half earning either an A or an A plus,” said Bruce Berman, Director of Strategy, Communications and Programs at Save the Harbor/Save the Bay, which produced the report.

2012 was also a dry year, which explains most of the changes we saw from 2011.
Bacterial pollution is often caused by storm water discharges that accompany summer showers, squalls and storms, so less rain means cleaner water.

In addition to drier weather, other factors have affected the results as well. In 2012, there were changes in the testing procedures at King’s Beach on the Lynn-Swampscott line and at Pleasure Bay in South Boston, where daily tests and new testing sites have given us a better picture of the water quality situation on those beaches.

In 2012, officials in Lynn and Swampscott identified and corrected illegal connections and broken pipes. They have agreed to meet this summer to discuss ways in which they can work together to address the persistent pollution problems at King’s Beach on the Lynn-Swampscott line.

There have also been efforts to address the outstanding water quality challenges at Tenean Beach in Dorchester, where Boston Water and Sewer has identified and corrected illegal connections that may improve water quality this season.

Overall flagging accuracy improved somewhat in 2012, as a direct result of DCR’s continuing efforts to develop more accurate models for beach management on a beach-by-beach basis.

While specificity (blue flag accuracy) is fairly high on many beaches, sensitivity (red flag accuracy) continues to be problematic, with less than 50% of the red flags posted correctly on some beaches in 2012.

Beach testing, posting procedures and flagging accuracy continue to be a challenge on these beaches, as they are elsewhere across the Commonwealth and the country.  This issue needs to be addressed if we are to protect both the public’s health and their right to enjoy the benefits of our region’s pubic investment in clean water and better beaches.

In 2013, Save the Harbor will continue to work with the Metropolitan Beaches Commission (MBC) and the DCR, MWRA, EPA, DEP, the Massachusetts Department of Public Health (DPH) and the Beaches Science Advisory Committee to develop more accurate models to better predict when to post or flag a beach.

“At Save the Harbor/Save the Bay our goal is clean water and not simply better models or faster and more accurate test results. We are working towards the day when there is no need for flags at all,” said Berman.

You can download the 2013 Beaches Report Card, see the data
and learn more about the methodology on which the report card is based at www.savetheharbor.org/Content/beachesreportcard

For more information on Save the Harbor / Save the Bay’s Beaches Report Card,
contact Bruce Berman on his cell at 617-293-6243 or email bruce@bostonharbor.com

Save the Harbor / Save the Bay would like to thank Dr. Jim Shine and Dr. Judy Pederson, Co-Chairs of our Beaches Science Advisory Committee, Dr. Andrea Rex and Kelly Coughlin of the MWRA, DCR’s Gary Briere, and Save the Harbor’s Staff Assistant for water quality Jacqueline Sussman for their help with this report.

Labels: Beach, Boston Harbor, report card, Save the Harbor / Save the Bay