The Story of the Invasive Asian Shore Crab 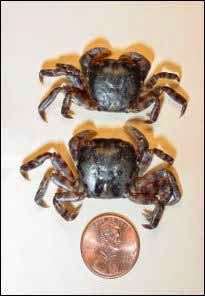 Hi! My name is Christian Herbosa. You may remember me from the blog post on the American Eel. Here's what I have to say about the Asian Shore Crab:
The Asian Shore Crab is one of many invasive species that have successfully established colony populations in North America. An invasive species is an introduced species or a non-indigenous species that invades a habitat outside of their native range. These invasive species can have a negative environmental, ecological, or economic affect on the habitats they invade. Invasive species can come in all life forms: animals, plants, or in this case crabs.
The Asian Shore Crab is native to the Western Pacific from Russia to Hong Kong including the Japanese Archipelago. Their enormous native range is largely due to their diet. They are opportunistic omnivores meaning they'll eat most things: microalgae, salt marsh grass, larval/juvenile fish, invertebrates, and more. Their flexible diet is also one of the main reasons why they were able to successfully invade the Eastern Seaboard of North America, despite the differences in ecology from the Western Pacific.

It was first seen in North America in 1988 on the shores of New Jersey. It is widely believed that these critters found their way to the East Coast in the ballast water of a shipping vessel. Ballast water is held at the bottom of cargo ships in the ballast tank. The ballast water is used to lower the center of gravity of the ship in order to provide adequate stability after they drop off their cargo. So cargo ships will take on large amounts of coastal water into their ballast tank after they unload their cargo, then discharge their ballast water at their next port of call.

The first Asian Shore Crab colonizers were probably taken onto a cargo ship in ballast water from the Western Pacific. These individuals then journeyed across the Pacific to the Atlantic in the ship's ballast tank to be discharged on the East Coast. This is the story of many invasive marine species including: the Zebra Mussel, several strains of Cholera, the European Green Crab, and many more.
Since their invasion in 1988 the Asian Shore Crab has grown in population and range. Similar to their vast native range, these invasive crabs have established a extensive nonnative range on the East Coast stretching from North Carolina to Maine. Their introduction to the coastal ecosystems of North America has had a negative affect on the populations of the native marine species. The Asian Shore Crab threatens native species directly through predation and indirectly through competition for limited food sources. By disrupting the balance of the food chain, they pose a serious threat to a wide variety of native species including commercially viable crabs, shellfish, and fish. The overarching threat that Asian Shore Crabs and other invasive species pose is a threat to the biodiversity of the invaded habitats, which is crucial to the health of the native ecosystem. Invasive species in worldwide threaten biodiversity on a global scale. The aggregate quantity of invasive species has increased along side of our increasingly globalized society. A decrease in the global levels of biodiversity could have disastrous effects on the global ecosystem.
So what do we do?!?! Well, once an invasive species has established itself, it is incredibly difficult (if not impossible) to get rid of them. So the best environmental policy response should be a forward thinking one. First, we should prevent the spread of invasive species in the future. Ballast water has been identified as the cause for a number of invasive species introductions. We must prohibit or treat the discharge of ballast water in nonnative areas. 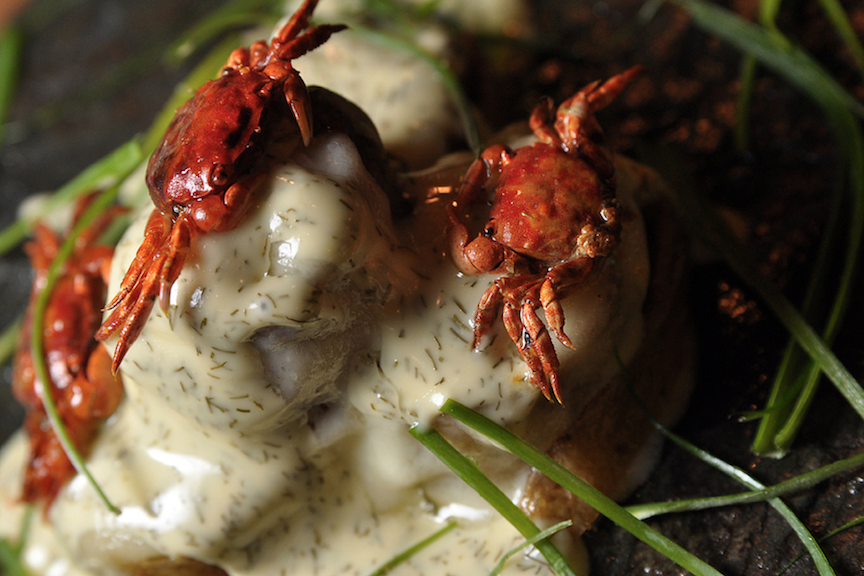 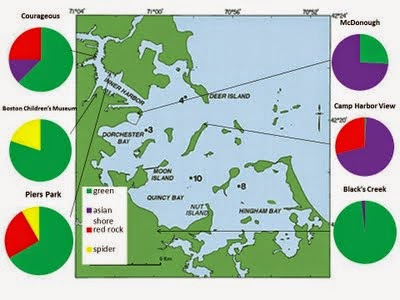 Another commercially viable option for the mitigation of the Asian Shore Crab is to use them as a replacement for Horseshoe Crabs in the bait industry. Thi Tran, one of Save the Harbor/Save the Bay's former Harbor Explorers, found Asian Shore Crabs as a useful replacement bait on one of our summer excursions to George's Island: read about it here! Asian Shore Crabs have attended many of Save the Harbor/Save the Bay's youth beach programs. While they represent a fun part of our summer youth programs, we feel that it is important to educate the youth and the general public about the environmental threat that they represent. In the summer of 2011, we conducted a research project to find out how the Asian Shore Crab has established its populations in the Boston Harbor. Our findings are pictured above to the right. To lean more about our research on Asian Shore Crabs in the Boston Harbor click here.

To learn more about Asian Shore Crabs and the Invasive Species Problem, explore these links: