All About that Bass

The Black Sea Bass (Centropristis striata), also known as a Rockbass and Tallywag, is not a bass at all!  In fact, the black sea bass is a member of the grouper family, and in no way is related to the striped bass or freshwater bass.  It is a popular commercial and recreational species found along the East Coast from Massachusetts to the west coast of Florida. There are two separate stocks of black sea bass in the Atlantic, divided at approximately Cape Hatteras, North Carolina.  In 2000, the black sea bass population north of Cape Hatteras was declared overfished, but has since rebounded thanks to improved reproduction and growth rates as well as strict fishing regulations.  In addition, black sea bass have also made a huge return to Boston Harbor thanks to the cleaner water conditions!

Black sea bass grow slowly and on average become 2 feet in length and can weigh upwards of 10 pounds.  Large black sea bass are black in color; smaller ones are more of a dusky brown. The belly is slightly paler than the sides. The fins are dark with dark spots, and the dorsal fin is marked with a series of white spots and bands.  Black sea bass often eat whatever prey is available, but they especially like crabs, shrimp, worms, small fish, and clams. 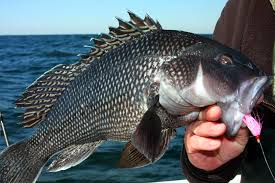 Black sea bass are "protogynous hermaphrodites"—which means that most black sea bass start out as females, and as they mature and grow they become males. Researchers aren’t sure why this happens, but one hypothesis suggests the scarcity of males in a spawning group may be the stimulus for a female to switch sex. Black sea bass spawn in coastal areas from January through July. During spawning season, male black sea bass turn bright blue and develop a pronounced blue hump on their heads. Depending on their size, females can produce between 30,000 and 500,000 eggs in a spawning season.

In the Mid-Atlantic, the way black sea bass are caught changes seasonally with the species' seasonal migrations—when they're inshore, commercial fishermen catch them primarily with fish pots (both baited and un-baited) and hand lines. Recreational fishermen can also fish for black sea bass when they're inshore. Once they swim offshore in the winter, they're caught in trawl fishing. (Although effective at catching fish, trawling often results in bi-catch of other less desirable fish species.) Once caught, black sea bass can be fileted and cooked in several different ways,  It's even possible to use the bones and carcass as the base for a stock or soup broth.


Check out the video below to learn how to filet the bass and
the links below for some yummy recipes!

http://allrecipes.com/recipe/grilled-sea-bass/
http://www.fishing-nc.com/fish-recipes/black-sea-bass-recipes.php
Similar to the flounder, black sea bass can also be used to make beautiful fish prints!  Because the bass is "round" instead of flat like the flounder, these prints may take a few tries before producing the perfect print!


And remember, the bass can still be filleted and cooked to eat as long as the inky skin is removed.


For more information on the black sea bass, the status of the species,
and fishing regulations check out these websites!