June 8, 2016, Just Off Boston Light: On Wednesday evening, Save the Harbor/Save the Bay hosted a sunset cruise to the oldest manned lighthouse in America as they celebrated 490 Years of Anniversaries at Boston Light on Bay State Cruise Company’s flagship, Provincetown II. 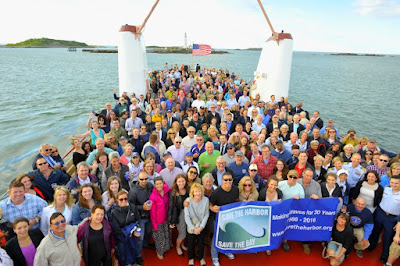 378 people were onboard for the celebration, which took place on a beautiful summer evening despite predicted squalls and storms.

“Save the Harbor/Save the Bay was founded in 1986, so it’s our 30th Anniversary this year,” said Save the Harbor’s spokesman Bruce Berman, who was married 16 years ago to Save the Harbor's President Patty Foley just off Boston Light. “So rather than celebrate alone, we chose to honor our federal, state and non profit partners whose support has been so important to our success to join us, many of whom are also celebrating milestones this year.”