The Metropolitan Beaches Commission (MBC) will hold nine public hearings in the winter and spring of 2019 in waterfront communities from Nahant to Nantasket to receive public input about the state of the beaches. The first hearing, which was rescheduled due to snow, will be held in Hull on Tuesday March 5th, from 6:00-8:00pm at the Nantasket Beach Resort and Hotel at 45 Hull Shore Road. 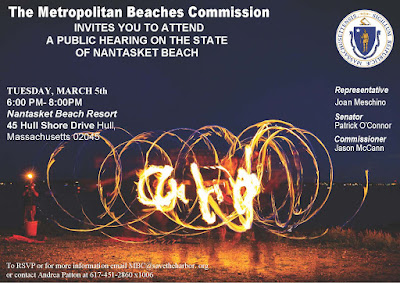 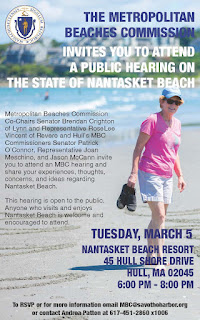 “Nantasket Beach is not only an incredible space for recreation in our community, but an economic driver as well,” said State Representative Joan Meschino. “The Metropolitan Beaches Commission has done important work to ensure that we have the resources we need to maintain and improve the area. I look forward to seeing neighbors, residents, and anyone who visits and loves Nantasket Beach at the hearing on the 12th so that we can hear from you.”

“One of the most important lessons we have learned is that the region’s residents really love their beaches, and have great ideas about how to make them better,” said Bruce Berman, Director of Strategy and Communications at Save the Harbor/Save the Bay, which has helped to lead and manage the Commission since its inception. “We look forward to hearing from the residents of Hull and all

The 2019 Metropolitan Beaches Commission hearings will be held on the following dates:
If you love your beach, but can't attend the MBC Hearing, you can share your thoughts by taking part in the MBC online survey at https://tinyurl.com/BeachesSurvey
those who love Nantasket Beach.”
at 12:58 PM