MBC To Hold Public Hearing In Winthrop On May 14

The Metropolitan Beaches Commission (MBC) will hold the final community hearing, the seventh of nine public hearings in the winter and spring of 2019, for waterfront communities from Nahant to Nantasket to receive public input about the state of the beaches. The hearing for Winthrop will be held on Tuesday, May 14th from 6-8pm at the Arthur T. Cummings School. 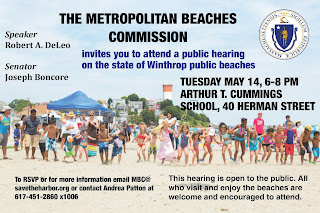 “Winthrop Beach is one of Winthrop’s most valuable assets,” said Senator Joseph Boncore, who serves on the Metropolitan Beaches Commission. “The MBC works tirelessly to protect our natural resources to ensure they are accessible for generations to come.”

“One of the most important lessons we have learned is that the region’s residents really love their beaches, and have great ideas about how to make them better,” said Bruce Berman, Director of Strategy and Communications at Save the Harbor/Save the Bay, which has helped to lead and manage the Commission since its inception. “We look forward to hearing from the residents of Winthrop and all who love Winthrop Beach.”

Each hearing will give community members and beach goers the chance to share their thoughts on the state of their beach, and share their ideas and recommendations to make them even better. The Commission will hold a hearing in late May to review its draft findings with the public before releasing their final report in June. The Commission has held hearings in Nahant, Lynn, Revere, East Boston, South Boston, Dorchester, Hull, and finally Winthrop between February and May 2019. The MBC held a hearing in Quincy in August of 2018, and the feedback received will also be included in the Commission’s report.

If you love your beach, but can't attend the MBC Hearing, you can share your thoughts by taking part in the MBC online survey at https://tinyurl.com/BeachesSurvey.
at 9:45 AM