On March 11, 2018, over 150 brave beach lovers plunged into Boston Harbor at BCYF Curley Community Center in South Boston as part of the 7th annual Harpoon Shamrock Splash to benefit Save the Harbor/Save the Bay. 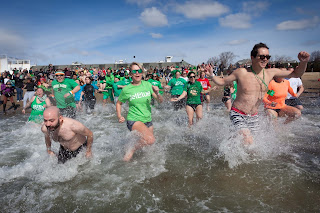 On Sunday, more than 150 costumed splashers plunged into the cold waters of Boston Harbor. Photo by Mike Murowchick.

This year, the “pledge and plunge” fundraiser raised more than $50,000 to support Save the Harbor/Save the Bay’s Better Beaches Program Partnership with the Department of Conservation and Recreation, which provides a spectacular summer of free concerts and beach festivals, sand-sculpting competitions, and youth programs on the region’s public beaches in Lynn, Nahant, Revere, Winthrop, East Boston, South Boston, Dorchester, Quincy and Hull. You can find the exact tally on the event website at www.shamrocksplash.org.

“This year we caught a break, and missed the really wicked weather,” said Save the Harbor/Save the Bay’s spokesman Bruce Berman, who has splashed each year since the event began. “Thanks to everyone who helped us raise funds to support another great season on the beach in 2018.” 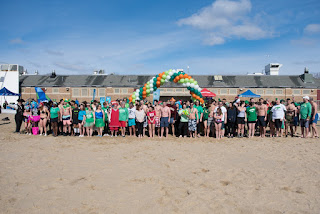 Splashers line up on the beach ready to take the plunge at the 2018 Harpoon Shamrock Splash. Photo by Katy Rogers.

Commissioner of BCYF, Will Morales, was on hand to wish splashers good luck, although he did not dip into the water. “Mayor Walsh and I truly value our partnership with Save the Harbor/Save the Bay and the work they do to serve Boston’s youth and families from every neighborhood.”

DCR Commissioner Leo Roy added, “Department of Conservation and Recreation staff work hard every single day to ensure that agency managed natural resources, such as beaches in Boston, Hull, Nahant, Revere, and Winthrop, are clean, accessible, and enjoyed in a safe environment. The Baker-Polito Administration continues to foster strong partnerships that leverage excellent outdoor recreational opportunities for people of all abilities to benefit from.”

2018’s Harpoon Shamrock Splash was the best ever, with splashers enjoying delicious brunch burritos from Baja Taco Truck and fresh, hot chowder from Daily Catch while Mix 104.1 played hit music on the beach. Harpoon beers invigorated participants after their plunge. 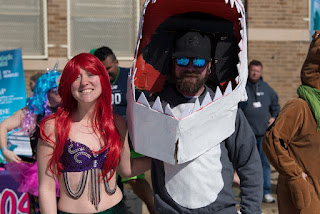 “All of us at Harpoon look forward to taking a quick dip into the icy water after our Harpoon St. Patrick’s Day festival to support a great cause and warm up with a refreshing Harpoon, brunch burrito, and clam chowder on the beach with our friends from Save the Harbor/Save the Bay,” said Harpoon Brewery President Charlie Storey. “Sure it was cold in the water, but the warm feeling you get from giving back to your community stays with you for a long time.” 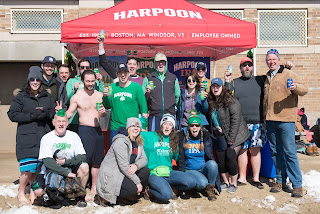 Team Harpoon Brewery at the Splash. Photo by Katy Rogers.

Participants won JetBlue flights and great Harpoon swag for reaching fundraising goals. Bridget Ryan from South Boston who raised $1,190 and Carol Haney from Revere who raised $1,185 were the top two fundraisers. They each won round trip JetBlue flights for their efforts. The two costume contest winners, Miriam Rathbun, an MIT student from Pittsburgh, PA as Ariel, The Little Mermaid, and Joe Skahan from Lynn as Shark Man won JetBlue flights as well. Every splasher and contributor also had the opportunity to win prizes in two post-splash JetBlue flight raffles. 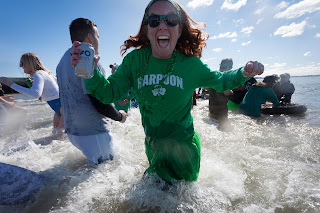 Bridget Ryan from South Boston raised $1,190 and was one of the top two fundraisers at the 2018 Harpoon Shamrock Splash. Photo by Mike Murowchick. 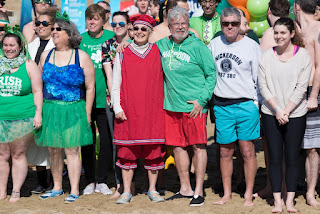 (Left to right) Carol Haney (one of the biggest fundraisers) and Bruce Berman (Save the Harbor/Save the Bay). Haney, from Revere, raised $1,185. Photo by Katy Rogers.

"At JetBlue, we are committed to our community and fun is one of our core values,” said Donnie Todd, Corporate Responsibility Liaison for JetBlue, who led a team of 30 participants. "More than 3,000 JetBlue crewmembers call Boston home, we cherish our harbor and proudly support Save the Harbor/Save the Bay and the work they do on the region's public beaches."

Members of Save the Harbor/Save the Bay’s leadership team were also key fundraisers, but were ineligible to win JetBlue flights. Save the Harbor/Save the Bay’s Chair of the Board, Joe Newman from Arlington, raised $3,101. Bruce Berman, Director of Strategy and Communications from Brighton, raised $2,826. STH/STB’s Vice President of Programs and Operations, Chris Mancini from Somerville, raised $2,272.

The top five teams also raised significant funds at this year’s Harpoon Shamrock Splash. Save the Harbor/Save the Bay topped the list with $25,614. JetBlue raised $6,193 followed by Piers Park Sub-Aqua Warriors with $4,862. Team Harpoon! raised $4,390 and Grandma and Grandkids raised $1,295.

Participants could direct their fundraising to their favorite local beach and notable donations were raised for the top five beaches. South Boston led with $7,180 followed by Lynn & Nahant with $4,101. Winthrop was third with $3,021. Participants raised $2,200 for Constitution Beach and $1,656 for Revere Beach. In addition, Dorchester received $995, Wollaston with $880, and Nantasket with $815. 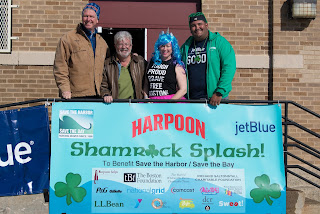 We would also like to thank the Massachusetts Legislature, the Baker-Polito Administration and the Metropolitan Beaches Commission for their support for our beaches, and our program partners at the Department of Conservation and Recreation, the Boston Centers for Youth and Families and the Greater Boston YMCA for their support.

You can download a copy of the most recent Better Beaches program report at http://savetheharbor.org/Content/2017_Beaches_Report.pdf
at 9:56 AM