On Sunday, March 6th at noon more than 150 “Shamrock Splashers” hit the cold, clean water at Constitution Beach in East Boston and raised more than $50,000 to support Save the Harbor/Save the Bay’s Better Beaches Program partnership with the Department of Conservation & Recreation. 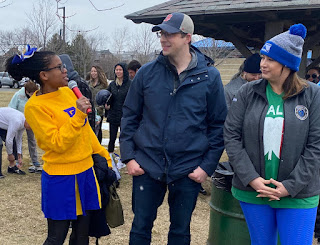 Newly elected State Senator Lydia Edwards of East Boston and State Representative Jessica Giannino of Revere joined event host and Metropolitan Beaches Commission Co-Chair Representative Adrian Madaro of East Boston in welcoming the crowd to Constitution Beach and thanking Save the Harbor/Save the Bay, which has invested nearly $2 million dollars in free beach events and programs since the first Splash in 2008.

Participants won prizes for biggest fundraiser and best costumes, including flights on JetBlue and great swag from Harpoon Brewery, and enjoyed quesadillas, chowder, Arctic Chill Hard Seltzer and Harpoon after their splash. 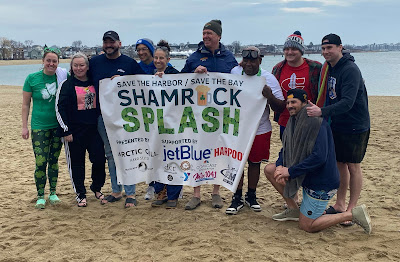 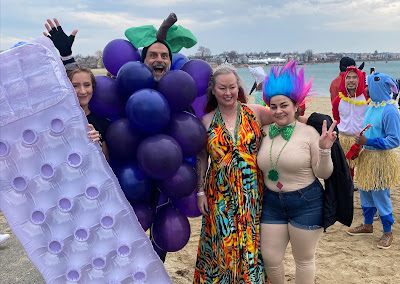 Kennedy Elsey congratulates Costume Contest winners Jenn Brundage of Allston and Christian Matyi  of the South End who splashed as the “Grapes of Raft” and Felicia Harwood of Worcester, who splashed as a stylish troll.

Mancini thanked Metropolitan Beaches Commission Co-Chairs Senator Brendan Crighton of Lynn, and Representative Adrian Madaro of East Boston and the legislative and community members of the Commission as well as Senate President Karen Spilka and House Speaker Ron Mariano for their support for our beaches and our communities. He also thanked the Baker-Polito Administration, the Massachusetts Legislature, Save the Harbor's partners at the Department of Conservation and Recreation, the Boston Centers for Youth & Families, the YMCA of Greater Boston, and the hundreds of people who took part in the Shamrock Splash for their support.

Here's a screenshot of the leader board which you can find at www.shamrocksplash.org.

Please note that Joe, Chris and Bruce aren't eligible to win prizes - but had fun getting cold for a great cause anyway.

Proceeds from this year’s Shamrock Splash will be invested in free events and programs on the metropolitan region’s public beaches in Nahant, Lynn, Revere, Winthrop, East Boston, South Boston, Dorchester, Quincy, and Hull. You can find out more on their website at www.savetheharbor.org