On Saturday, September 21st Save the Harbor attended the 3rd Anniversary Celebration of HarborArts, Inc. commemorating the opening of the first exhibition ever held at the Boston Harbor Shipyard & Marina. It was a beautiful day at the Shipyard, and we were excited to see so many people supporting the community, arts, and East Boston neighborhood.
﻿﻿﻿
﻿
The day before the event Edlyn Chavez, our Development Intern, and I set-up a crab trap nearby hoping to catch some sea creatures. On the morning of the event, we set-up our touch tank ready to show off Larry the Lobster and Rock Crabs straight from the Boston Harbor. We were also able to collect Mussels and small Moon Jellyfish. We quickly released the Moon Jellyfish, but I thought it was interesting to see how many we could scoop up with our tiny dip nets.
﻿﻿
﻿﻿﻿﻿
This was my first time at the HarborArts Festival, and it was a great experience to be a part of such a well organized and successful event led by Matt Pollock of HarborArts. The theme this year was "East Your Art Out", and in the past three years the festival has grown in sponsors, vendors, and participants. There were many vendors from the East Boston Neighborhood and artwork from across the globe. The band, London Bridgez, played live music, and hamburgers were cooking on the grill to satisfy anyone's appetite.
﻿﻿﻿﻿
﻿﻿﻿﻿ 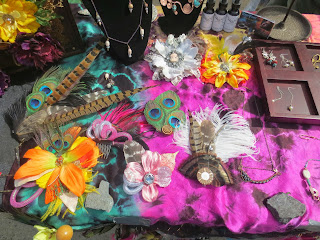 Save the Harbor was also able to see many friends new and old at the HarborArts Festival. Rachel Edwards, one our dedicated Board Members, stopped by with her daughter to see Larry and his friends. They enjoyed learning about Larry the Lobster and touching the different animals. 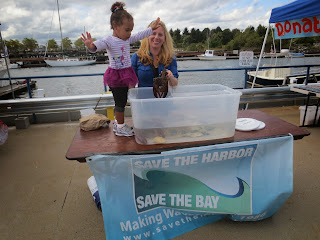 We were also able to spend time with our new Development Manager, Ryn Miake-Lye, while she volunteered for HarborArts to help direct traffic and oversee parking. 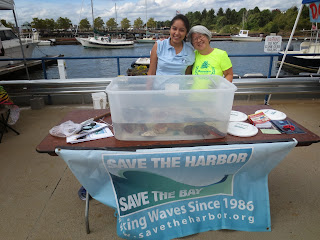 It was a wonderful day to spend time in the East Boston community educating families about the Harbor, working with our Save the Harbor Staff and Board Members, and enjoying the last bit of Summer and welcoming the Fall season.