Metropolitan Beaches Commission Hears From Residents of Lynn, Swampscott and Nahant on May 30th

The Metropolitan Beaches Commission held a regional public hearing on the state of the Metropolitan Region's public beaches in Lynn, Swampscott and Nahant on Tuesday evening, May 30th from 6:00pm - 8:00pm at Lynn Museum/LynnArts, 590 Washington Street in Lynn. 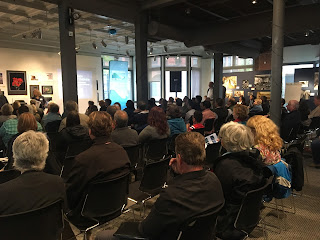 Metropolitan Beaches Commission Co-Chair Senator Thomas McGee of Lynn and Co-Chair RoseLee Vincent of Revere hosted the hearing where residents of Lynn, Swampscott and Nahant shared their thoughts on the state of our public beaches, and heard updates from community leaders including:
MBC Commissioners Carol Haney of Revere, Barbara Bishop of Winthrop, Jeffrey Chelgren of Nahant, Robert Tucker of Lynn, Representative Brendan Crighton , Manny Lopes of East Boston, Mounzer Aylouche of Swampscott, and Representative Donald Wong were present to hear from the public and share their thoughts as well. Representative Daniel Cahill and Representative Lori Ehrlich were also in attendance, along with a number of Lynn city councilman, and Lynn Mayor Judith Kennedy. 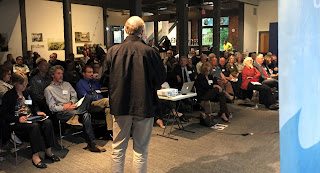 Prior to the hearing, Save the Harbor/Save the Bay released their annual Water Quality Report Card on the region's public beaches in 2016. Director of Strategy and Communications Bruce Berman explained the Water Quality Report Card at the hearing, giving attendees a snapshot of the 2016 beach season. Some beaches scored perfectly, while some did not, and Berman explained that the past 6 years of results paints a better picture than just the data collected last year. Three beaches are still scoring a low B (85% or below) and two beaches have consistently tested low-- King's Beach in Lynn, and Tenean Beach in Dorchester.

King's Beach was the focus on the presentation Kelly Coughlin gave from the Beaches Science Advisory Committee (BSAC). Her presentation focused on water quality at King’s Beach, and described the special monitoring Save the Harbor/Save the Bay is undertaking this spring. She discussed the challenges of urban interface with recreational water quality issues, having a beach right next to a major urban area. King’s Beach is a prime example of these challenges including storm water, street run-off, waste from birds and dogs, combined sewer overflows, and relief points located in the system to prevent flooding, which in turn release untreated sewage.

However, at King’s Beach, storm water discharge from Stacey's Brook outfall is the primary source of issues which affects both the Lynn and Swampscott side of King's Beach. Kelly discussed the IDDE (illicit discharge detection and elimination) monitoring Lynn accomplished this summer, and Swampscott is in the process of issuing a new sewer rehab project, with focus on the area affecting Stacey’s Brook. They are beginning the first phase of the project, and the project is expected to take several years, with a completion date in 2021.

Both sides of Stacey's Brook outfall are also tested, not just the outflow site, and there is a dramatic range of bacteria that are being seen in results. There are also significant increases in the concentration of bacteria. Within the outfalls, there is no difference between wet and dry weather conditions. Kelly Coughlin, working with Ben Wetherill of Coastal Sensors, along with the rest of the Beaches Science Advisory Committee is working on solutions to these issues.

After Kelly Coughlin concluded her presentation, Susan Hamilton, Director of Parks Operations for DCR, and a Metropolitan Beaches Commissioner gave a short presentation on DCR's budget, and their hopes for the next year. She stated that DCR’s vision for beaches is to have safe accessible beaches we can be proud of with facilities available 365 days a year, and healthy lifestyle recreational opportunities available all season.

After over 5 million dollars in cuts were made to the DCR budget in FY2017, many Lynn, Nahant, and Swampscott residents have been worried about adequate staffing, and algae removal on their beach. Susan Hamilton announced that there was $800,000 appropriated for staffing in FY17 which included long-term seasonal staff for summer and short-term seasonal are filtering in to support beach staffing and to supplement year-round staff.

And, despite announcing that algae would no longer be removed from King's Beach after July 1, Governor Baker has now committed to continue to remove algae throughout this season, and this effort will continue into the fall. Susan Hamilton also announced that 3,500+ tons of algae has been removed this fiscal year, and there is $30,000 available until the end of the fiscal year to continue this removal. DCR has a contract with Capital Recycling who transports the algae to a composting facility in New Hampshire.

DCR has also begun water quality testing last week and will continue this on all public beaches through Labor Day, with both inland and coastal testing. Signage will be present to warn about elevated bacteria levels in the water, and DCR is instituting a new flag warning system that is being modeled after the federal standard. This new flag system will be at coastal beaches by the end of June, Hamilton announced.

There will be trash removal daily in Revere, Nahant, Winthrop, and East Boston. Daily beach raking will also take place in Revere and Nahant.

The $5 million of cuts made to DCR's budget included $100,000 that has, in the past, been used to supplement funds for Save the Harbor/Save the Bay's Better Beaches Program. While DCR will not be contributing to the grants awarded this year, DCR will continue to support key programs such as the Sand Castle Festival and the July 3rd Friends Concert with staffing and other needs.

Many important questions were asked by both commission members as well as residents, and a provoking discussion was had. You can view full meeting minutes here: www.savetheharbor.org/MBC

Senator McGee closed the hearing by stating the importance of advocating for these funds to Governor Baker and his administration. He stated that these investments need to continue, and it is up to us to make sure these critical investments don’t fall by the wayside. $5 million is a substantial cut to the DCR budget, and it is evident that the public wants the money to be invested in their beaches. He thanked everyone for attending and emphasized the importance of staying involved and staying engaged, and emphasized that public input is a key part of this process. "You have the ability to be a part of this and to have your voices heard. Work with us as we move forward to make sure these are beaches we can continue to be proud of."

The Metropolitan Beaches Commission was created in 2006 by the Massachusetts Legislature to take an in-depth look at the 15 Boston metropolitan region's public beaches in Nahant, Lynn, Revere, Winthrop, East Boston, South Boston, Dorchester, Quincy and Hull that are managed by the Department of Conservation and Recreation.

For more information about the MBC and its history and accomplishments, or to download copies of the Commission's 2007 and 2014 reports, visit www.savetheharbor.org/MBC
You can make a contribution to support Save the Harbor's work here.
at 11:08 AM