Save the Harbor and Boston Consulting Group Work Together to Clean Tenean Beach!

On Thursday September 20th Save the Harbor/Save the Bay staff teamed up with Boston Consulting Group (BCG) as part of BCG's Service Day 2018 for a clean-up at the Department of Conservation and Recreation's Tenean Beach and Finnegan Park in Dorchester. 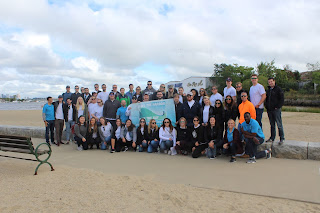 Tenean Beach, in the Port Norfolk neighborhood, is a swimming beach with a playground and tennis courts located at the mouth of the Neponset River where it opens into Dorchester Bay. Finnegan Park, a short walk away, is a relatively new DCR park having been converted from industrial to recreational use in 2017 after undergoing rehabilitation. 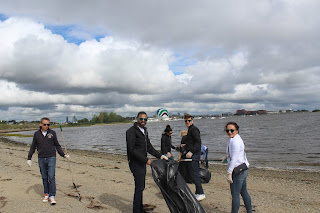 On Thursday the group of 50 employees from Boston Consulting Group helped to make both of these properties cleaner and more accessible by removing two tons of debris, weeds, and wash up over the course of the day. Volunteers working on Tenean Beach scoured the sand, green areas, and parking lot to pick up debris, and raked storm wash up from the beach. Another team removed weeds from the seawall and sidewalk. In the afternoon volunteers swept sand that had blown onto the sidewalks back onto the playground. 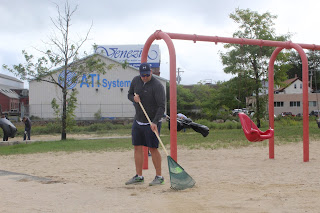 The group at Finnegan Park spent the day removing phragmites, an invasive sea grass, from the shoreline and cutting a strangling vine that was overtaking the local flora. Volunteers also combed the park removing plastic trash and debris from the green spaces. 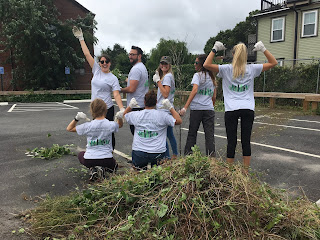 “It was a very productive day on the beach, thanks to our partners at Boston Consulting Group,” said Chris Mancini Vice President for Programs and Operations at Save the Harbor/Save the Bay. “In just a few hours we removed two tons of waste, something that might take a week of regular staff time during the fall season, freeing up DCR staff to take on other projects on beaches and parks around the area.” 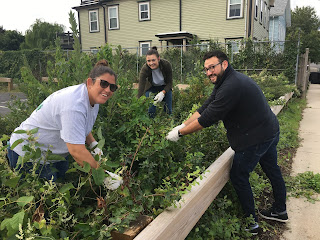 This day of service was part of Save the Harbor's stewardship program, a collaboration with DCR and our corporate partners to help preserve, maintain, and improve the region's spectacular waterfront resources. This summer, in addition to Boston Consulting Group, we've also partnered with Boston 25 News at Carson Beach, Boston Properties at Victory Road Park and Hines at Squantum Point Park. Particularly after the winter's wicked strong storms, these beaches and waterfront parks saw an increased need to remove debris, rebuild pathways, and restore sand. Save the Harbor is proud to work with our partners as we prepare these beaches for the fall and winter season.