Save the Harbor and Boston Properties Team Up to Tackle Trash

Following some extreme weather on Tuesday evening, the skies were calm and the temperature was cool on Wednesday, May 16th, when staff and interns from Save the Harbor/Save the Bay and volunteers from Boston Properties’ 200 Clarendon building went out to DCR’s Victory Road Park in Dorchester for a day of service. 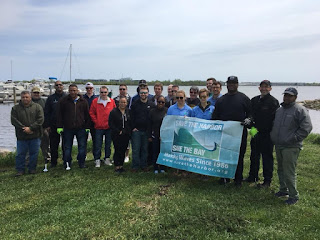 “Victory Road Park is a really incredible spot right on the harbor here in Dorchester,” said Chris Mancini, Vice President for Operations and Programs at Save the Harbor/Save the Bay. “We are so excited to be starting our second year of this 3-year project to ocused on working with DCR to maintain this park, and we are grateful for their commitment. We cannot overstate how important this work is, not only for the sake of this park itself but for the impact it has on nearby Tenean Beach.”

The first task for the group was to take an inventory of winter and storm damage sustained by this waterfront park. Parks and recreation areas across the state, but especially in coastal communities, were hit hard this winter by two so-called “hundred year storms” and the result is clear to visitors as they begin to return to the parks. Victory Road Park is no exception. Large piles of gravel and bricks, plant debris, and litter had washed up into the park. Small trees had been uprooted as the sand eroded, and had washed up into the pathways, as had several very large pieces of wood that posed a safety hazard with nails and other metal pieces protruding from them. 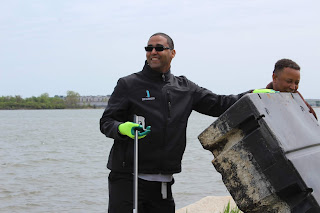 A large plastic buoy had washed up onto the island.

Also on the list of tasks at this park was pet clean up. Dogs are allowed to enjoy Victory Road Park with their human companions and many do. Unfortunately not every dog owner who visits the park abides by the rules for cleaning up after their canine companions, which can create a pretty messy situation. The impact stretches beyond the park itself. Given its location at the head of the Neponset River, just upstream from Tenean Beach, these unremoved piles become untreated waste that can wash up at Tenean Beach and create a public health crisis for swimmers and other beachgoers. 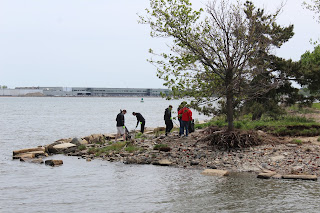 The group scoured the park, from edge to edge, clearing debris. The exposed roots of the tree show how much erosion has occurred.

With their mission laid out, trash pickers in hand, and a boost of energy from a delicious lunch from Redbones, provided by Boston Properties, the team took to the trails! Many volunteers combed the park, removing waste and litter from every spot they could find. Another group raked and shoveled several piles of washed up debris off of the pathways. 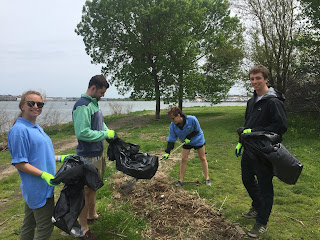 Dirt, plant matter, and innumerable bits of debris had washed up into the park, beyond the pathways.
This group is removing the contaminated wash up.

Everyone pitched in to remove large wooden posts and other large debris that blocked the paths. In a single afternoon the group removed two full truckloads of waste and debris from the park, just one portion of the work needed to ready this park for the summer, and to keep Tenean Beach safe all summer long. 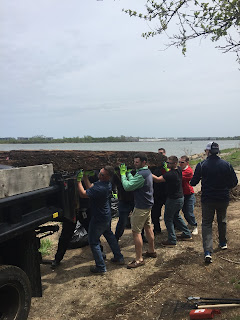 This large column was blocking the path into the park. With nails and screws sticking out of it, it was a
real safety hazard until this group got it up and away!

“We are incredible grateful to all the volunteers who came out today,” said Bruce Berman, Director of Strategy and Communications at Save the Harbor, “and we appreciate everything that Boston Properties does to support a clean and active waterfront for all our region’s residents.” 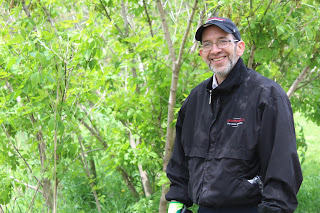 Volunteers ended the day with a smile.

The service day on the 21st was the first of three such events that Save the Harbor/Save the Bay and Boston Properties 200 Clarendon have planned throughout 2018.
at 3:36 PM