Hines and Save the Harbor Sweep Up Storm Surge

Even the threat of looming thunderstorms couldn't keep volunteers from Hines out of Squantum Point Park today! More than 25 employees of the real estate investment, development, and management firm joined Save the Harbor staff and interns for an afternoon of stewardship at this spectacular waterfront park in Quincy. 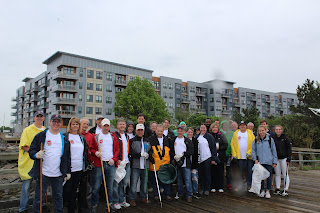 Starting the day at the pier!

"This park used to be a naval airfield and the pathways follow the old airstrips that were in use through World War II," said Chris Mancini, Vice President for Operations and Programs at Save the Harbor/Save the Bay. "All our waterfront parks and beaches are spectacular places to spend the day, but the history here makes it pretty unique." 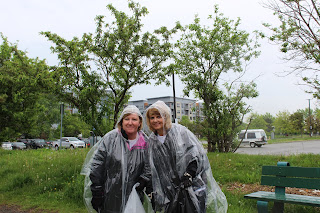 Most people donned ponchos to start the day.


Luckily the rain stopped shortly after we began our cleanup, allowing everyone to work more efficiently, and to take on another important task: raking up storm washup. Squantum Point Park is at the tip of a peninsula, and the storm surge and flooding from the major storms that hit at high tide this winter brought debris pretty far into the park. Given the problems these piles can cause for the pathways, especially given how thoroughly mixed in the plastic, metal, and styrofoam trash is with the theoretically decomposable plant matter, this wash up all needed to be raked into piles and bagged for removal. 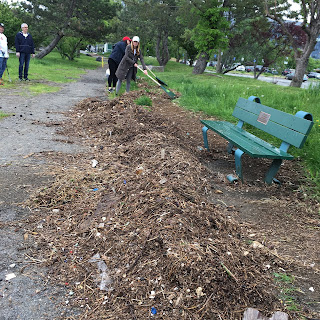 Just one of the piles of storm wash up that needed to be removed.
This pile was nearly over the seat of the bench when we arrived.

After scouring the park for litter, and removing what felt like literal tons of storm wash up everyone felt a connection to Squantum Point. Some volunteers were even starting to talk about the next time they were going to get out on the water (we hope it will be with us, on our June 6th Share the Harbor cruise to Boston Light)!

We would like to thank Hines for their support for Save the Harbor and for the region's public beaches. 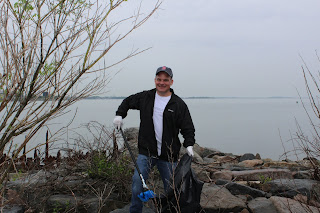