Getting the Hull Story: The Metropolitan Beaches Commission Hearing on Nantasket Beach

On Tuesday March 5th Metropolitan Beaches Commission Co-Chairs Senator Brendan Crighton of Lynn and Representative RoseLee Vincent of Revere convened a public hearing in Hull on the state of the Department of Conservation and Recreation's Nantasket Beach. More than 30 people gathered at the Nantasket Beach Resort in Hull to participant in this important discussion. This was the first of nine public hearings slated for the spring for the MBC and Save the Harbor/Save the Bay to receive input on the region’s public beaches from those who live near and who use the beaches.


The Hull hearing began with opening remarks from the MBC's Hull Commissioners, State Representative Joan Meschino, State Senator Patrick O'Connor, and local resident Jason McCann, who thanked everyone in the room for attending the hearing.

Representative Meschino emphasized how Nantasket Beach is a "priceless treasure and a gem on the South Shore" not only as a recreational asset but also as an economic driver for the region. She encouraged everyone to engage fully in the discussion because the feedback that this Commission receives has been "invaluable" and it helps the Commissioners to "advocate on Beacon Hill for the assets we need to preserve and protect this resource." 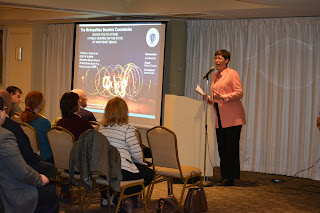 Senator O'Connor noted how important hearings like this are in order to build "support for initiatives at the state level and the local level, right here in Hull that are going to lead to dramatic improvement for our beaches." 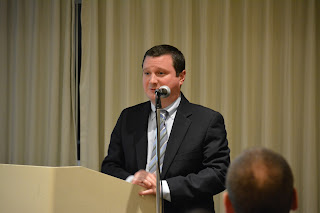 Commissioner McCann noted that at 26 acres and 1.3 miles long, Nantasket Beach Reservation is "a large part of our town and it's always been a large part of our history." He noted how many community discussions about the future of the beach are on-going, and encouraged people to think about everything from trash pick up to climate change during the breakout groups. 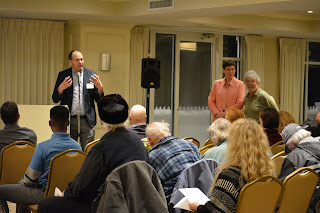 Next Save the Harbor's Bruce Berman gave an update on the state of Nantasket Beach, highlighting Nantasket Beach’s superb water quality ratings and the variety of free programming that takes place on the beach each year. Several popular events are supported by the Better Beaches Program, a partnership between Save the Harbor and DCR, including Hull Illumination and Endless Summer.

Attendees then broke into discussion groups where everyone was able to voice their opinions and add suggestions for Nantasket. Many points were discussed in the small groups, which were then shared with the entire room, and topics ranged from the desire to see more winter activities at the beach to the number of shaded areas on the board walk. Some of the other themes of the discussion include accessibility, parking, climate change, and how much participants love Nantasket Beach! 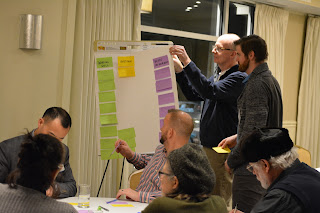 Better handicap access to the beach was a discussion point brought up by multiple groups. Suggestions included clearing rocks from the access ramps more often and all year-round, better advertising for beach wheel chairs, and having more wheelchairs available to rent. Folks would also like to see accessibility improvements at the bathhouses.

Many groups also discussed issues surrounding beach parking, including concerns over limited public and inexpensive parking spaces and the price of parking being too high for short term visits. Some participants recommended implementing parking and charging stations for electric vehicles. 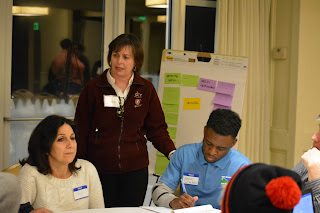 Climate change was also a theme in the discussion, as folks reflected on the changes they've seen over the years, particularly due to erosion.

Overall the groups were quite positive about all that is working well at Nantasket including high quality life guards, the great work from DCR staff keeping the beach and the bathhouse clean, and the wide variety of summer activities that take place each year. It's clear that people in Hull love their beach! 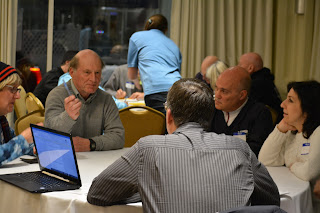