Nearly 50 people gathered at the North Shore Community College on Tuesday night to discuss the current state of the public beaches in Lynn and Nahant and to express their likes, dislikes and visions for these beaches. It was the third in a series of nine public hearings being hosted by the Metropolitan Beaches Commission (MBC) in the region’s beachfront communities as part of the process to write a report with findings and recommendations for the Commonwealth. 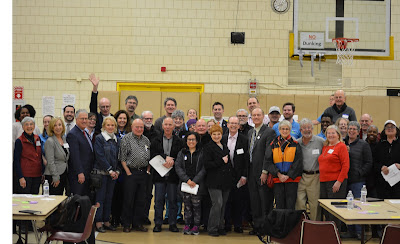 Commission Co-Chairs Senator Brendan Crighton of Lynn and Representative RoseLee Vincent of Revere opened the hearing by welcoming folks and encouraging them to engage deeply. Co-Chair Crighton noted that he has been involved with the Commission since he began working as a staffer for then Senator and Chair of the Commission Tom McGee, who also attended the hearing. Crighton said that “since then all of your recommendations have been put into these reports and not just ended up on some shelf collecting dust but have influenced how we approach our budget, along with our legislative priorities including the environmental bond bill.” He noted how “great it is to see these beaches crowded each summer”, but acknowledged that there are still improvements that can be made. He closed by encouraging people to share their thoughts in the breakout sessions stating that “the most valuable part of this hearing tonight is the breakouts where we can hear from you and you can go into things in more detail.” 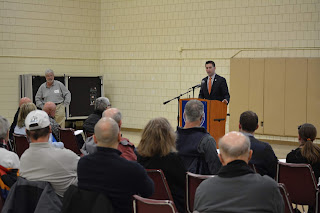 Co-Chair Representative Vincent told everyone that while she is very proud to represent Revere, she was “really here tonight to listen to all of you and find out what is important to the people in the City of Lynn and Town of Nahant.” 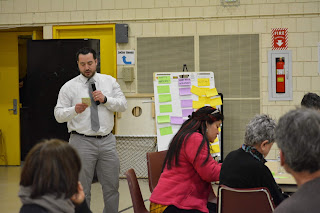 Beach lovers from Lynn, Nahant, Swampscott, and Marblehead attended the hearing where Save the Harbor/Save the Bay, which leads and manages the Commission for the Commonwealth, presented information on the current state of the public beaches. Save the Harbor’s Director of Strategy and Communications Bruce Berman provided an update on the progress that has been made to improve water quality conditions at Kings Beach which faces persistent challenges.

Attendees then split into smaller discussion groups for a chance to voice their opinions. People were encouraged to make notes on ‘what’s working well,’ ‘what needs improvement’ and ‘what’s missing.’

Participants mostly agreed that what is working well includes timely trash pickup, the concerts and summer activities, and the landscaping along the beaches. Some groups discussed the improvement in rare birds in the area and the steps that have been taken to protect their habitats. Attendees also praised the Department of Conservation and Recreation’s dedicated work to remove pilayella algae at Kings Beach, while expressing a desire to find a more permanent solution. 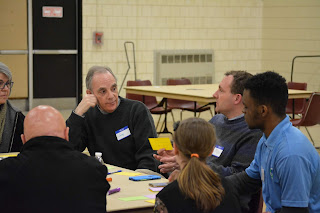 The small discussion groups seemed to come up with similar notes in the ‘what needs improvement’ category including summer traffic and parking as well as the need to have toilets available all year-round. Many also raised concerns over the water quality challenges related to the Stacey’s Brook outfall and expressed a need for increased signage regarding when to avoid swimming near that spot in the short term. Better protection of dunes was also mentioned, along with the need to invest in improvements to stairwells and handrails.

The ‘what’s missing’ category brought about the widest array of discussion topics. Some highlighted pedestrian safety and suggested adding more crosswalks and repainting the existing ones, as well as the need to better enforce the speed limits. Groups discussed the need for more educational signage and programs for people of all ages, the desire for more concessions and vendors along the beach, and a range of creative ideas for new programming and events on the beaches. 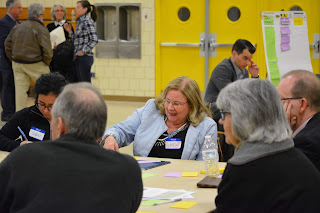 After the breakout sessions each group reported to the crowd the highlights of their discussion. The Commission closed by thanking everyone for their input and inviting them to a regional review hearing on May 18th from 10am-12pm at UMass Boston where the MBC will present their findings and recommendations for Lynn and Nahant’s public beaches and ask attendees to give feedback before the report is finalized.

If you have questions, or would like to provide your input but were unable to attend the hearing, the Commission accepts comment via email at mbc@savetheharbor.org or through the online survey found at tinyurl.com/BeachesSurvey. The survey is also available in Spanish and Chinese.
at 2:23 PM