Splashing in the Snow to Support Public Beaches

On March 10, 2019, nearly 200 beach lovers braved not only the chilly winter waters but also snowy weather and plunged into Boston Harbor at the BCYF Curley Community Center in South Boston as part of the 9th annual Harpoon Shamrock Splash to benefit Save the Harbor/Save the Bay and the Department of Conservation and Recreation's Better Beaches Program. 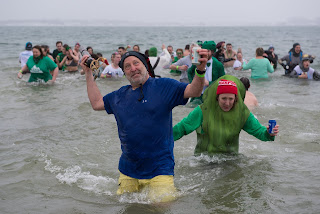 This year, the “pledge and plunge” fundraiser raised more than $50,000 for the Better Beaches Program, which provides grants to community organizations that host free events and programs on the region's public beaches. Each year the program supports free concerts and beach festivals, sand-sculpting competitions, and youth programs on public beaches in Lynn, Nahant, Revere, Winthrop, East Boston, South Boston, Dorchester, Quincy and Hull. You can find the exact tally on the event website at www.shamrocksplash.org.

“Thirty years ago nobody wanted to go swimming at the region's beaches and today, they are some of the cleanest urban beaches in the country,” said Save the Harbor President Tani Marinovich. “It’s amazing to see the community that supports this event and supports our beaches from Nahant to Nantasket.” 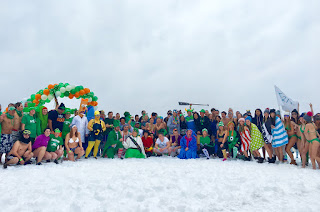 Splashers line up on the beach ready to take the plunge at the 2018 Harpoon Shamrock Splash. Photo by Katy Rogers.

Before the sprint into the ocean, Boston 25 Meteorologist Vicki Graf was on hand to deliver a real-time weather report -- although the air temperature was 34 degrees, the water itself was a balmy 40 degrees!

Even though everyone was already wet from the snow and rain before splashing into the Harbor, 2019’s Harpoon Shamrock Splash was the best one yet, with splashers enjoying delicious brunch burritos from Baja Taco Truck and fresh, hot chowder from Daily Catch while Mix 104.1 played hit music on the beach. Harpoon beers invigorated participants after their plunge.

"I love when it snows on Splash day," said Bruce Berman, Director of Strategy and Communications for Save the Harbor/Save the Bay, who has splashed every year since the event began. "We're hearty here in New England and the only thing we love more than snow is the beach." 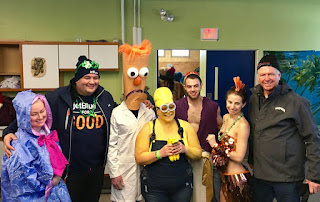 “All of us at Harpoon look forward to taking a quick dip into the icy water after our Harpoon St. Patrick’s festival to support a great cause and warm up with a refreshing Harpoon, brunch burrito, and clam chowder on the beach with our friends from Save the Harbor/Save the Bay,” said Harpoon Brewery President Charlie Storey. “Sure it was cold in the water, but the warm feeling you get from giving back to your community stays with you for a long time.” 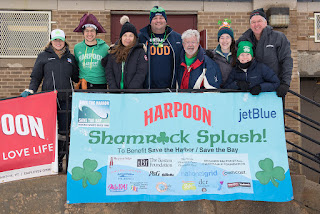 Participants won JetBlue flights and great Harpoon swag for reaching fundraising goals. Mary Cole from East Boston, who raised $1,530 and had the most donations to her splash -- who followed through on her promise to her donors to dye her hair green if she met her goal! -- and Trevor Etheridge from Jamaica Plain, who raised $1,655 were the top two fundraisers. They each won round trip JetBlue flights for their efforts. 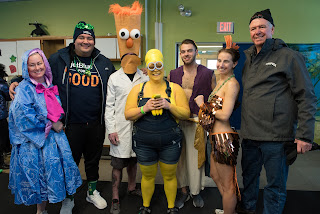 Left to right: Kennedy Elsey of Mix 104.1, Donnie Todd of JetBlue, Joe Skahan of Lynn dressed as Beaker from the Muppets, Elaine Howley of Waltham dressed as the Banana Minion, Nick Russo of South Boston dressed as Aladdin, Jane Kepros of East Boston dressed as a goldfish, and Charlie Storey of Harpoon.

The two costume contest winners, Elaine Howley of Waltham, dressed as the Banana Minion, and Joe Skahan from Lynn, dressed as Beaker from the Mupets, won JetBlue flights as well for their creativity and enthusiasm. Second place costumed splashers were Jane Kepros of East Boston, as a Goldfish and Nick Russo of South Boston, as Aladdin. They won swag from The Harvey Traveler Collection. Special thanks to Kennedy Elsey of Mix 104.1 for once again serving as contest judge! Every splasher and contributor also had the opportunity to win prizes in two post-splash JetBlue flight raffles. 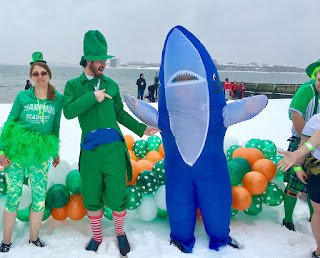 Martha Laposata of Blue Cross Blue Shield of Massachusetts, Trevor Etheridge of Save the Harbor, and Carlos Fuentes of the East Boston YMCA strike a pose before splashing. Etheridge raised $1,655 and was one of the top two fundraisers at the 2019 Harpoon Shamrock Splash. Photo by Matt Phillips. 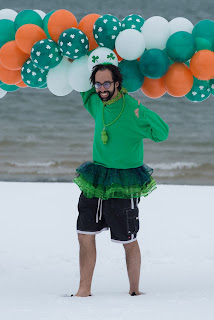 
The top five teams also raised significant funds at this year’s Harpoon Shamrock Splash. Save the Harbor/Save the Bay topped the list with $13,373, followed by JetBlue with $10,990 and the Piers Park Sub-Aqua Warriors with $4,950. Team YES raised $3,162 and Team Harpoon! raised $2,720. 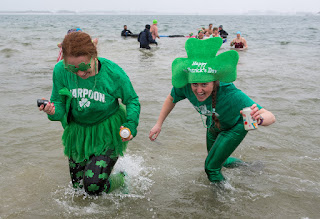 Bridget Ryan of South Boston and Kristen Barry of Cambridge return with their Harpoon beers after splashing. Photo by Katy Rogers.

We would also like to thank the Massachusetts Legislature, the Baker-Polito Administration and the Metropolitan Beaches Commission for their support for our beaches, and our program partners at the Department of Conservation and Recreation, the Boston Centers for Youth and Families and the Greater Boston YMCA for their support.

You can download a copy of the most recent Better Beaches program report at http://savetheharbor.org/Content/2018_Beaches_Report.pdf