With temperatures in the eighties last Friday, it was a perfect day to spend at the beach for Blue Cross Blue Shield’s 9th annual Service Day: One Community. One Blue. On September 20th more than 3,000 employees volunteer at 52 different sites across Massachusetts. More than 40 of those associates chose to join Save the Harbor/Save the Bay at the Department of Conservation and Recreation’s Carson Beach in South Boston to help clean up the beach and the surrounding green space. 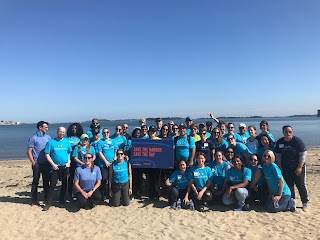 The morning started at the McCormack Bath House with an introduction to Save the Harbor’s mission from Vice President Chris Mancini complete with a sea chanty promoting teamwork to set the tone for the day. Representatives from DCR introduced the tasks that needed completing, and after that the groups were on their way. 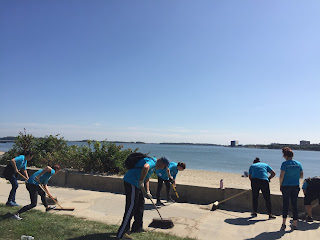 The next three hours were spent hard at work picking up trash along William J. Day Boulevard, painting shade shelters along the boardwalk, removing sand from the sidewalk behind the sea wall, and landscaping at the nearby South Boston Neighborhood House. During this time, the teams made up of Save the Harbor Staff, Blue Cross Blue Shield employees, and DCR staff took the time to get to know one another. Everyone involved was friendly and talkative, and the tasks at hand allowed each group to unite around a common goal. 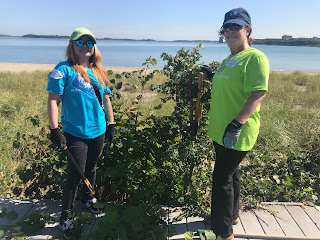 After a delicious lunch provided by BCBS, the morning groups joined together for the final push to remove the sand from the sidewalk and return it to the beach. Wielding brooms and shovels, the group quickly moved across the miles of beach until the sidewalk was clear for pedestrians and cyclists alike. 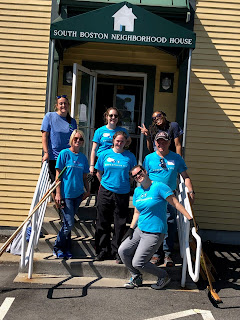 It is truly amazing how much one group of people can get done in a short period of time when they are motivated and unified around a common goal. The teams really dove right in on getting the work done efficiently and thoroughly so that they accomplished an immense amount in a few short hours despite the grueling heat and sun.

Thank you to everyone who took part in this great event on the cleanest urban beach in the country. All of us at Save the Harbor/Save the Bay appreciate having Blue Cross Blue Shield as our partners on their service day, and we thank them for their continued support, hard work and dedication to our mission and our community.