Not Quite Clean Enough: Save the Harbor/Save the Bay’s 2016 Beach Water Quality Report Card

Save the Harbor/Save the Bay released its annual water quality report card on the Boston Harbor region’s public beaches from Nahant to Nantasket on Friday, May 27, 2016 just in time for Memorial Day. 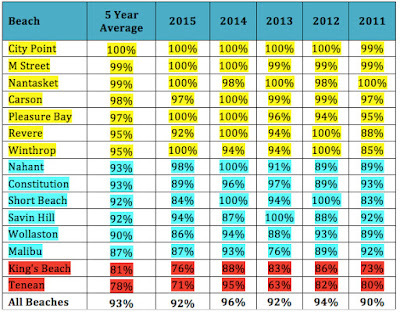 In 2015, overall water quality on all of the Boston Harbor Region’s public beaches was down from a high of 96% in 2014 to 92% in 2015, primarily as a result of frequent summer storms. Though total rainfall was actually up slightly from 2014, in 2015 there were more than 30 summer days with some rain, which adversely affected water quality on beaches in Lynn, Revere, East Boston, Dorchester and Quincy.

“Though the overall numbers are down a bit this year, the report card still contains good news for many of our beaches, including those in South Boston which are still the cleanest urban beaches in the country,” said Save the Harbor’s spokesman Bruce Berman. “However the persistent pollution problems at King’s Beach on the Lynn/Swampscott line and at Tenean Beach in Dorchester and other area beaches continue to jeopardize the public’s health and prevent residents from enjoying the benefits of our $5 billion investment in clean water. While we are pleased that Boston Water and Sewer has identified several significant sources of bacterial contamination in Dorchester, we look forward to working with local state and local government to finish the job we began together 30 years ago.”

City Point, M Street, and Pleasure Bay in South Boston and Nantasket Beach and Winthrop Beach topped the list this year, with perfect scores of 100%. Of the 15 beaches in the report, which was based on data collected during the 2015 swimming season, 7 earned primary beach safety scores of 95% or more while 6 scored 85% or higher.

King’s Beach in Lynn and Swampscott scored just 75% and Tenean Beach in Dorchester scored just 71%, failing to meet the state swimming standard more than once every 5 days during the 2015 swimming season.

“Scores like this are simply unacceptable to the people who rely on these beaches for recreation, especially given the publics $5 billion investment in clean water. We hope this report will provide decision makers the information they need to begin the next round of investments in improved water quality on beaches that consistently lag behind,” said Patricia A. Foley, President of Save the Harbor/Save the Bay

Funds to improve water quality in beachfront communities and waterfront neighborhoods from Nahant to Nantasket were authorized in the 2014 Environmental Bond Bill but have not yet been appropriated.

“The Baker-Polito Administration remains committed to ensuring the state’s beaches remain not only accessible for all to use, but also safe for public enjoyment,” said Energy and Environmental Affairs Secretary Matthew Beaton. “The Water Quality Report Card serves as a good barometer of the excellent results the state and its partners are achieving to ensure the Commonwealth’s beaches remain among the cleanest and most beautiful in the nation, and we remain committed to work with Save the Harbor/Save the Bay and other stakeholders to protect and improve these spectacular natural resources for generations to come."

“Investments in clean water and urban beaches are good for the region,” said Foley. “They strengthen our economy and improve the quality of life for all our residents, many of whom can’t afford to get away to Cape Cod or Cape Ann.”

Save the Harbor/Save the Bay would like to thank Dr. Jim Shine and Dr. Judy Pederson, Co- Chairs of our Beaches Science Advisory Committee, Kelly Coughlin and David Wu of the MWRA, DCR’s Dennis Fitzgerald and Save the Harbor policy interns Eileen Dalessandro, and Brittany Angelo for their help with this report.

For more information on Save the Harbor/Save the Bay’s Beaches Report Card, contact Bruce Berman on his cell at 617-293-6243 or email bruce@bostonharbor.com


You can download the 2016 report card and the data on which it is based at http://www.savetheharbor.org/Content/beachesreportcard/

You can make a contribution to support our work here.
at 8:15 PM