This week I had the pleasure of working at the Children's Museum's Earth Day. We heard pirate stories and even solved some riddles. Larry the lobster joined us, and all of the kids loved him. My favorite part of the day by far was the mural. I had a drawing competition with a friend and of course my octopus won. 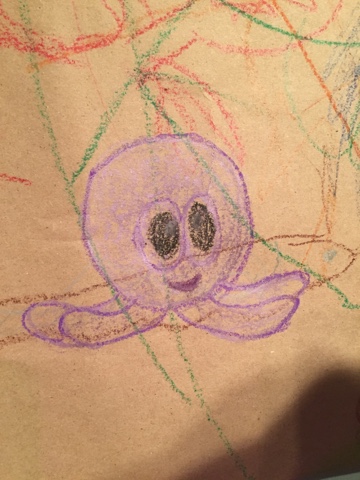 The mural was full of fun aquatic life and some interesting characters such as Dori and Sonic were drawn. Later in the week we went on the Marine Mammals Safari, where we saw seals more than 10 times. They were hard to spot but all of the kids had their eyes peeled. I met one family who was there photographing each sighting, but when seals weren't there they were excited about every animal they saw. They photographed birds and even buildings. It was great to see a family from right in Boston enjoy seeing the nature around them. They were truly inspiring because they showed me that just because things aren't going as planned that doesn't mean it's not still great.