Hi everyone! It's Rusenny! It's been so many weeks since my very last blog post on the last day of summer, and making this one brings back so many of the wonderful memories that I made this summer! Yesterday, October 29th, I got the chance to visit Spectacle island after weeks of saying goodbye. I was really surprised at how many people began to show up with their kids all bundled up, not letting the cold October weather stop them from exploring Spectacle. As we were all getting on the boat we took a huge group picture which made it feel like summer all over again (with the non-stop photos)! It was cold, but it was worth it. It wasn't until we got on the boat and started passing each Boston Harbor island, that I realized how much I had missed these wonderful views. Everything looked a bit different from the summer, some of the trees were almost leafless, and the grass looked much greener rather than the yellow color it usually had from the harsh summer sun.

When we got to Spectacle, for many it was their very first time and they began to explore the island right away. Many of the kids, and even parents were very excited in looking for the blue marbles that were hidden all around the island with there being a prize of a free plane ticket to almost anywhere. We also took walks up to the top of Spectacle with small groups and talked about the island and the things that we most loved about it. Norah Dooley was also there telling some of her pirate stories to the kids. I could tell everyone was having a blast and it felt nice to be back. I can't wait to see what awesome memories this upcoming summer will bring. 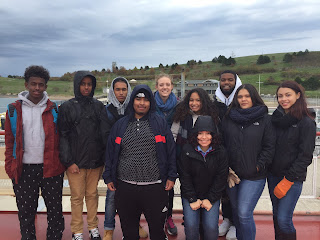