An Unforgettable Day with a Lobster

It feels good to get to hold a crab after almost a year. It also feels good to get to hold a lobster for the first time and showing it to the kids. For the first time in my life, I got to hold an alive lobster, Lola to be exact. At first, I could not tell whether it was a male or a female lobster, but then, somebody told me and other people that if the inside top legs were soft, it was a female. And if the inside top legs were harsh, it was a male. That was an important fact to know about lobster because many kids asked me how did I know if it was a male or a female. When the kids arrived at the touch tank, the first thing they asked was "is it alive?", "can I touch it?" or "how much does it weigh?". They were amazed the first time they saw Lola in my hand. Some kids ran away from it and others got closer to it. When it started to move, the kids got afraid and moved two steps back. 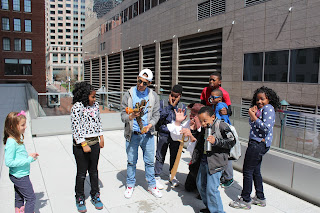 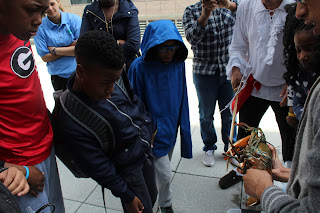 When the first kid touched it, the others started to touch it too. Although we had a crab and it was big, the kids paid more attention to the lobster. It was a windy day so the kids that were outside, decided to go back inside and do some fish printing, draw or to listen to a story from Tony the Pirate. It was a fun day and it was good to bring back some good and amazing memories from the amazing summer I had with SHSB.