This weekend marked Save the Harbor/Save the Bay's annual Marine Mammals Safari Cruise! This was my first time on the trip, exploring the harbor in search of seals and porpoises willing to surface and say hello on the rainy day.

The clouds made identifying the sea critters increasingly difficult, especially the porpoises whose brief appearances could be missed in the blink of eye! From the looks on the passengers' many faces, however, this did not detract from the amount of fun had from catching a glimpse of one of these marine mammals peering their heads out of the water. Nor did it deter them! I saw many a passenger equipped with binoculars, bouncing from one deck to the next in hopes of being the next one to announce a sighting. Admittedly many blunders were made; driftwood being mistaken for porpoises; buoys being taken for seals. I myself may have announced a sighting or two that panned out to be nothing more than a bobbing cormorant head.

Though I enjoyed spotting the different marine mammals "porpoising" about the harbor, the highlight of the trip came at its close, when the STHSTB staff and myself escorted the passengers off the ship and shared our last farewells. The many thanks and words of appreciation we received from the exiting voyagers and their families reaffirmed for me the importance of the organization's mission to provide Boston's neighborhoods and communities with opportunities like these affording the city's inhabitants the chance to interact directly with its beautiful harbor! 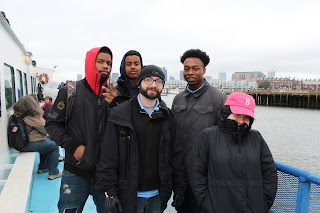