April Vacation with Save the Harbor Family

Last Wednesday, I came back home with my second family, the Save The Harbor crew at an event. Atlantic Wharf was where the event was held. I saw Cristian, Rusenny, and Nieomi there as well, helping out. The kids were really into the fish printing and they continued to go back and make more and more. There was also a pirate there to entertain the kids with ghostly stories and other pirate related games. Larry made a guest appearance too, well apparently this lovely lobster was named Lola, but the name will always be Larry.  When the kids went outside onto the patio to see Larry, they were amazed. Some have never seen a real lobster before. Some of the kids were scared that he would pinch them, but we showed them that his claws were rubber banded together to prevent that from happening. A few kids were more inclined to pet Larry, but other preferred to observe from a distance. Can't blame them, before I started working at Save The Harbor, if anyone would have told me I would pick up a lobster or crab I would have laughed because I never saw myself doing that. But now, after working with my second family, it is second nature for me.

The fish printing was once again a messy part of the day, different color ink sliding down the flounder. The kids were so curious about what we would do to the flounder after they were done painting on it. Since we do not believe in waste, we would use it as bait. Their eyes looked so big when we told them that, because they thought we were harming the wildlife of the sea. I explained to a little girl that since the ink used is non-toxic, it won't hurt the crabs or lobsters at all. She then got a relieved look on her face. I can say, this day was better spent than just sitting at home watching t.v. or being on a laptop. To educate the kids in something that they had some knowledge about, but not a lot was the best time spent. Hopefully, I'll be able to come back "home" this summer and continue having this wonderful feeling
Until another time
~Ari 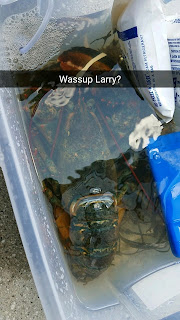