On Saturday, September 29, Save the Harbor continued to "Share the Harbor" with a free cruise to explore the Treasures of Spectacle Island. With a record 2,500 reservations, it is clear that demand for free access and programming on the Boston Harbor Islands is only growing, and this clear, warm fall day did not disappoint.

As the Provincetown II motored out into the Harbor, Save the Harbor's Vice President of Operations & Programs, Chris Mancini, shared stories and songs of the sea from our All Hands on Deck curriculum. "We want people who take part in our free programs to know that young men and women of every race and nationality played important roles in our maritime past, and that there are plenty of opportunities for them today on Boston Harbor, our waterfront and the sea." 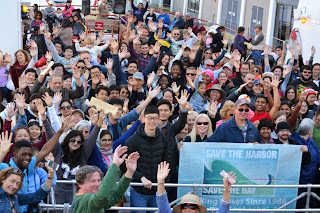 Our newest crew members "Haul Away Together" on the Proincetown II

Save the Harbor's song leader then taught and led a rousing rendition of "Haul Away Joe", a traditional sea chantey that also happens to have an inspiring message: that if we all pull in the same direction, we can accomplish anything. 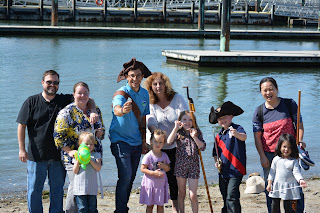 Once on Spectacle Island, visitors dispersed for picnics and walks on their own, while groups joined Save the Harbor's staff for fishing and crabbing on the pier, kite flying on the North Drumlin, and sports and games in the Saddle. The most adventurous joined our resident pirate for a walk along the South Beach where they discovered some of the "Treasures of Spectacle Island" which give a window onto the varied history of Spectacle Island. Though none of the treasures can leave the beach, our young "pirates in training" got a lesson in geometry and the scientific method as they drew transects at high and low tide, and developed hypotheses about where they might find the most interesting objects, and what each might tell them about the island. 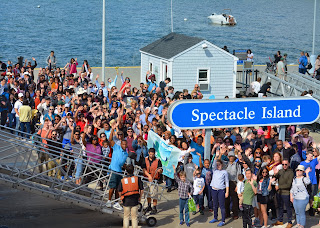 We bid the island farewell until October 20

We couldn't have asked for a better day to explore one of Boston Harbor's most spectacular places, and look forward to our next Share the Harbor cruise on October 20th.

Share the Harbor is funded in part by Mass Humanities, which receives support from the Massachusetts Cultural Council and is an affiliate of the National Endowment for the Humanities.

Save the Harbor/Save the Bay would like to thank our partners at Bay State Cruise Company, Blue Cross Blue Shield of Massachusetts, The Boston Foundation, The Coca-Cola Foundation, and Distrigas/ENGIE for their Leadership Grants which make all our free programs possible.

Special thanks to everyone who joined us on the cruise, and to the hundreds of individual donors for their generosity. Thanks as well to our partners at the Department of Conservation and Recreation, the Metropolitan Beaches Commission, the Boston Centers for Youth and Families and the YMCA of Greater Boston for their support.
at 5:33 PM