After several cloudy and rainy days, the sun finally cleared for our service day with Boston Properties on October 2rd! Volunteers from Boston Properties’ 200 Clarendon building join Save the Harbor/Save the Bay staff and interns at DCR’s Victory Road Park in Dorchester to spend the afternoon preparing the park for the fall season. 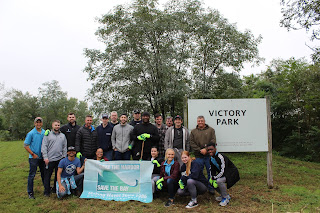 Volunteers including spent the day cleaning up Victory Road Park along the harbor in Dorchester.

“Victory Road Park is fun place to be, right on the harbor in Dorchester,” said Chris Mancini, Vice President for Operations and Programs at Save the Harbor/Save the Bay. “This is our second trip out this year, and our second year of a 3-year project focused on stewardship of this particular park. We cannot overstate how important this work is, not only for the sake of this park itself but for the impact it has on nearby Tenean Beach.”

The day started off taking inventory of the work that needed to be done. After cleaning storm debris and flooding washup earlier this year, the park weathered the summer season quite well. Plants had grown up along the new edge of the park, which is important going into the fall as the root systems help prevent erosion. A tour of the park revealed two main tasks: removal of dog waste, and cutting back and pulling out invasive species that had grown up along the parking lot. 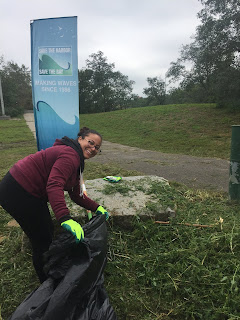 Volunteers collected dog waste and plant debris throughout the day.

As anyone who has visited Victory Road Park with their canine companions knows, it's a beautiful place to spend the day. Unfortunately not every dog owner who visits the park abides by the rules for cleaning up after their canine companions. Even a few such instances can build up over time and the impact stretches beyond the park itself. The park is at the head of the Neponset River upstream from Tenean Beach. When rain and storms hit, these unremoved piles become untreated waste that washes off the park and that can wash up at Tenean Beach. Boston Properties is committed to this park in part to mitigate potential public health crises for swimmers and other beachgoers that could be created by this waste.

In addition, sumac and other plants had grown so much in the last few months that they threatened to take over the parking lot at Victory Road Park. Volunteers quickly grabbed weed whackers (and safety goggles!) and began assisting DCR staff in cutting back vines and branches, and revealing larger plans to be cut and pulled. 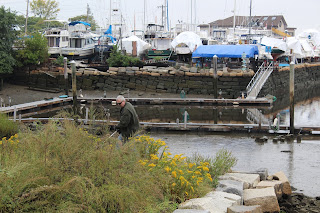 Several volunteers used weed whackers to trip growth that was threatening to encroach on the parking lot.

In all, the group removed one ton of dog waste and plant cuttings, just one portion of the work needed to ready this park for the fall, and to keep Tenean Beach safe all year long. 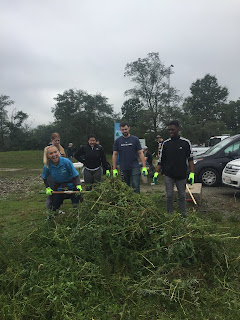 One ton of waste and debris was removed from Victory Road Park by the end of the day.

“We are incredible grateful to all the volunteers who came out today,” said Bruce Berman, Director of Strategy and Communications at Save the Harbor, “and we appreciate everything that Boston Properties does to support a clean beaches and parks for all our region’s residents.”