Members of the Boston Consulting Group Boston Office teamed up with Save the Harbor staff, the Department of Conservation and Recreation, the Fort Point Neighborhood Association, and Friends of Fort Point Channel to clean up Boston's waterfront and surrounding neighborhoods. Across two days, 50 volunteers removed more than three tons of trash, weeds, and branches from Carson Beach and the Fort Point Channel Neighborhood, improving 2 miles of public land in the process. The Boston Consulting Group (BCG) volunteer teams were extremely enthusiastic and hardworking, accomplishing a great deal in a short amount of time. 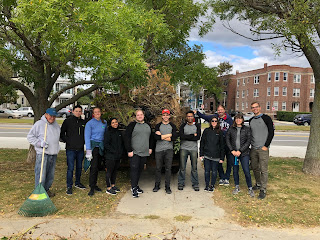 On Friday October 4th, BCG members met at DCR's Carson Beach to remove invasive plants from along the sea wall and clear the sidewalks of sand and leaves that had already begun to fall. The morning started off with higher temperatures and a bit of sun, which allowed for a great introduction to Save the Harbor's mission on one of our country's cleanest urban beaches. Wielding loppers, rakes, brooms and shovels, the team got to work and moved as a unit along the edge of the beach to beautify the area to tend and remove plants that were not only an eyesore but harmful to the native plants.

The day concluded with an amazing transformation of the beach entrance where volunteers and Save the Harbor staff removed more than a truckload of Sumac. In only a few short hours, the BCG group cleared over one ton of invasive materials and other debris from about 1.5 miles of beach, returned around 1,000 pounds of sand back to the beach from the sidewalks and ADA access ramps. 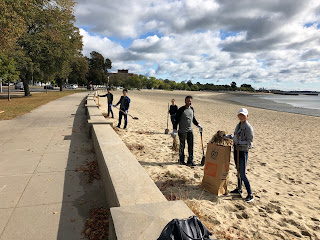 Friday October 11th brought 25 BCG volunteers to Wormwood Park in the Fort Point Neighborhood. With a nor'easter in the forecast, the hearty staff arrived ready to work. After brief introductions to Save the Harbor and our partners at Friends of Fort Point Channel and the Fort Point Neighborhood Association, they buckled down, in an bold attempt to complete all the work before the deluge began. The weed filled park, as well as the fencing along the parking lot on A Street were no match for the determined team of BCG volunteers who filled 62 bags of trash and debris in just over 90 minutes. 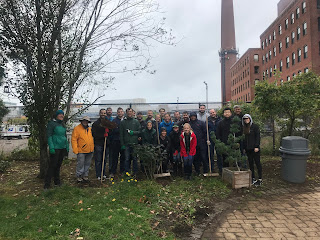 By lunch time, the mulch lining A street was visible, and most dramatically the park seemed to take on new life being cleared from tree and plant debris. Many passerby commented on our progress and thanked us for making their neighborhood a little nicer, which truly brought meaning to the day's endeavors. 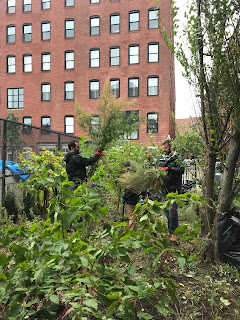 A big thanks goes out to Boston Consulting Group for their hard work, determination and dedication to their community, as well as to Save the Harbor's partners at DCR, Friends of Fort Point Channel and Fort Point Neighborhood Association.
at 4:28 PM