On October third I had the privilege to attend the Outfall Monitoring Science Advisory Panel alongside Save the Harbor Save the Bay, as a policy intern. The meeting was full of professionals from OMSAP and the MWRA, as well as representatives from several environmental groups in and around Boston. On one hand the meeting was conducted much as you might expect an advisory panel to go with presenters giving a summery of their research and making recommendations, on the other hand the conversions would often veer off into incredibly technical and specific research methods and data points. These sudden dives gave a much greater weight to the discussions and even with all the prep research I did beforehand I still had trouble keeping up.
Among the many topics covered were, legacy contaminants in sediment the surprise red tide bloom, Pre-cancer disease monitoring in flounder, passive sampling, emerging contamination, and the dangers of micro-plastics. I was pleased to see that the overall state of Boston Harbor is good and getting better, in fact the panel was able to halt two expensive tests as they were no longer required.
This year's red tide still doesn't have an answer but several hypothesis were presented and further research into making sure that the bloom doesn't stick around was requested.
Finally the presence of Micro-plastics was brought to the floor, the lack of proper research was a matter of some discussion.
All in all this meeting was an exceptional one especially for an intern such as myself as I want to understand the policy making process, it was also a lesson on just how much preparation is required to fully understand and appreciate the intricacies of the discussion and the ramifications of each decision. 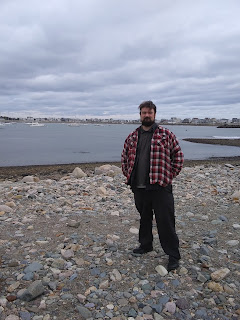