April Vacation on The Harbor

It was April vacation, and spending it on the Harbor was a great way to spend the week. On Tuesday I had the chance to spend my day at Atlantic Wharf with the YMCA. It was a cold day but we still managed to have a fun time. Inside, we set up fish printing stations where each pair of children had the opportunity to create a fish print. For many of them it was their first time fish printing. I don't know what they liked more, actually making a fish print, or touching a real fish for the first time. After making fish prints, the group headed outside for a chance to cast some rods and crab traps into the harbor. For many of them, just like fish printing, it was their first time casting a fishing rod. And everyone had a chance to meet Larry the lobster! It was another exciting day with the young explorers on the harbor. There was so much interest in learning and happy faces throughout the day. And I am glad to have had the chance to spend my day with the YMCA. 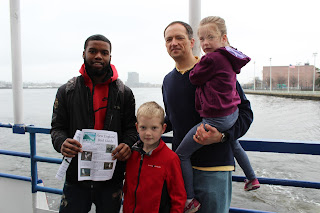 On Saturday, we held our Marine Mammal Safari on the harbor in hopes of seeing harbor seals and porpoises. As we took a tour around the harbor, many of the harbor seals decided to make many appearances, exciting all on lookers on board. Hey Justin! It was a pleasure showing you many parts of Boston while on the cruise. Only living In Massachusetts for 2 years after moving from California, it was a day of many firsts for yourself as well as little Eli and Avery. While taking pictures of porpoises, Eli was thrilled that he was on a boat for the first time, as well as getting a chance to take a picture of TD Garden while on the tour. He was ecstatic when he found out that the Boston Celtics played there. Although the weather attempted to put a damper on our day, we made the best of it seal watching. Everyone enjoyed their time and I hope to see Justin, Eli, and Avery again for another exciting time at Save The Harbor. Until next time, and keep on exploring, Preston.
at 11:24 AM