Seal Spotting in the Rain

I am pretty lucky. 10 years after my last job working on the Harbor, I am given the opportunity to become Save the Harbor/Save the Bay's Vice President of Operations & Programs. One of my first duties is to join my (insanely knowledgeable) new co-workers, returning Junior Program Assistants from our summer youth jobs program, and the crew and captain of Massachusetts Bay Lines on Save the Harbor's annual "Marine Mammal Safaris" this past Earth Day.

It's one thing to know in your mind that Boston Harbor, once a sewer and source of shame for our city, is now home to the cleanest urban beach in the country--something only possible because of the actions of thousands of people over multiple decades and a $5 billion public investment in the Harbor itself. It's another thing all together to stand on the deck of the "Freedom" and see proof of that in the form of dozens of porpoises diving (or porpoising) through the water, and harbor seals circling our boat. And the only thing better than seeing it with my own eyes for the first time? Hearing the literal "oohs", "aahs" and giddy gasps of excitement from over 200 people as they see it with their own eyes for the first time. 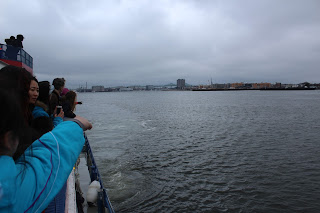 I have been involved with environmental education and awareness programs for most of my academic and professional life. I've shown land-locked students from Brooklyn live seahorses living blocks from their school; I've helped middle schoolers grow their own vegetables in former brownfields. But never have I seen and heard the pure, unadulterated amazement of people realizing they rode the T to a free boat tour and be practically within arms reach of the kind of wildlife they had only pictured in some distant sea, off the coast of California or in a Florida theme park.

And this all happened on a chilly, rainy Saturday when most people would have looked out their window and opted for a cozy day at home.

On our third trip of the day, as my forgotten geography and knowledge of Boston from the water started to trickle back into my brain, the rain started to fall harder. We had been out for over an hour and had only glimpsed a distant dorsal fin near South Boston. We had ducked in and out of Chelsea Creek, around Charlestown and up to the mouth of the Charles River: all the hot spots we had been spotting marine mammals since 9am that morning. But at 1pm, 300 damp people were starting to get restless. We had touted a harbor full of sea life that we had witnessed all morning. We had promised them a slew of cetaceans. And yet here we were, headed back toward Rowes Wharf on our final trip of the day with not much to blog about. Which is exactly the time when our Captain, Tim, suggested "you know, we've got an ebb tide here, and it could be all the food is heading back out into the harbor. It could be why we've come up short so far. Let's try one more thing."

Now, the sun didn't literally break through the clouds at that moment, but that is always how I'm going to remember this day. With only a few minutes until we had to be tying up at the dock, the Captain motored back out along the South Boston waterfront, and dead ahead, at 12 o'clock off the bow of the boat, a trio of sleek, black footballs appeared. Not quite believing my own eyes, I was nervous as I called it out to the crew: "dead ahead!" We'd had enough false alarms that this still did not feel like a moment to celebrate. But there they were again. And again! And now off the port side, and again at 3 o'clock on starboard! At least 10 porpoises were surrounding us, showing off, even reveling in the attention. And this is when the gasps came fast and loud. The porpoises came closer, swam away, returned again. Oohs from one side of the boat, aahs from the other. And then to cap it all off, just as we thought we couldn't be more surprised, a harbor seal surfaced feet from the bow, opened its giant, shiny eyes and look right at us. It paused, looked, and then made a slow circle of the boat, almost as if to be sure to say hello to everyone on the trip. I swear that seal looked me right in the eye.