Fish Printing at the Wharf!

It's been awhile since I've written here and I honestly can't wait til the summer to go fishing and to do more fish prints at the Beach Bash Events because those were honestly the best. Over April vacation I had the opportunity to do two events at the Atlantic Wharf and at first I was pretty nervous because it's been awhile but I got those fishing rods and that scent of flounder and I knew I was back home.The first group of kids were from the YMCA and they were freezing but we motivated them to fish and to see if they could see any fish in the water but sadly there was none and I told them they were resting and that they'd come back when it was warmer. It was also different because I finally got to meet Larry the Lobster who was pretty amazing and the kids were so scared because they thought he would "bite" them but I let them know that his pincers were tied together and that nothing would happen to them. 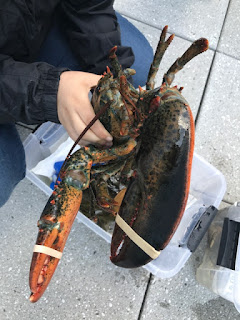 When the next group of kids came there was Tony the Pirate who would tell them hilarious stories and show them his gold and as they listened many kids would come to the table where I had a flounder fish and kids would try to see what kind it was then they would make fish prints and they all looked so beautiful.

I honestly can't wait til the summer so I enjoy the views and go to all the sites especially Carson Beach because it's like family and you get so used to seeing the same faces and enjoying the weather!