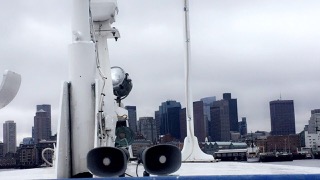 Have you ever been out on our marine mammal safari on earth day?
Although we didn't have the best weather we had the best crowd coming out to join us on our fun event. Personally I thought we weren't going to see any seals, porpoises or birds but, it turns out that we did, we got to see every single last one of the animals we told our guests what we were going to see. Once I got on the boat I was feeling little sea sick but then got the hang of it because believe me the last time I got on a boat was last summer with Save the Harbor and man! Has it been a while.  I remember talking to a woman who was telling me she was sightseeing at Castle Island and spot something that looked like a dolphin and she quickly pulls out her phone to show us what she was talking about. She said that she only stayed because maybe it got lost and was in need of help but in a blink of an eye it was gone. I had to break the news to her that it couldn't have been a dolphin especially during these types of conditions in Boston. However I did tell her that it could've been a porpoise. So I told her to give give me a minute to go get her one of our facts sheets dedicated to porpoises and sure enough the pictures looked IDENTICAL!
Unfortunately I didn't get any pictures of our beautiful birds or porpoises I did however get the pleasure to finally get a seal in action peeking his or her head out. Did you know that seals have long necks to catch their prey. I don't know if the seal saw something or just relaxing... or maybe even posing for us but whatever it was doing I was glad all our guests left on a good note from seeing it. So this is how the story goes, on our way back some spotted a seal not too far from the boat. It was literally a swim or two away from us and it was awesome see it poke its little head up. And for most of us we often don't believe that there is much in the sea but guess again theres ALOT! I remember being inside the boat to freshen up a little when I seen the crowd rush out to the second level and most ran to the window that I was closest too. All you heard was excitement and immediately everyone took out their devices to take pictures/ videos of the seal. It was definitely quite an experience to see all or wonder mammals.The best part for me was being able to get off the boats and seeing smiles of all the younger wonder children who had had and the adults who had never seen any of this before.  Have to admit it was pretty cold but hey better days are coming soon.