Boston’s Fish Pier in South Boston isn’t your average pier. It’s not a tourist destination, like Santa Monica Pier. And it’s not a small-town, wooden dock to go fly fishing on. While there doesn’t seem to be much action, a closer look reveals the Fish Pier is a busy, industrial center. A walk around the apron shows men working to pull in their catch from medium-sized ships. 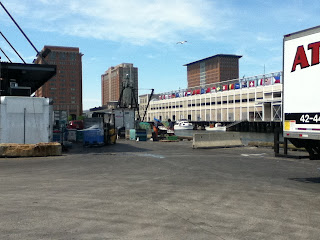 The Fish Pier is also teeming with marine life. While is difficult to see past the depth of a meter, schools of small fishes dart back and forth to the current in the water below. Various mollusks line the edge of the pier and ships. Seagulls are noticeably larger here than other places, due to the easily found scraps from the fishing boats. 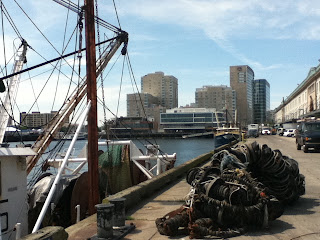 As a part of the larger Port of Boston, the Fish Pier holds a special significance as the oldest fish pier still in use in the United States. This label is not especially evident, however, as the pier is not specially marked with signs and plaques. Despite the lack of recognition, the Fish Pier continues to provide for the fishing and maritime industries that have been using the port since it opened in 1915.