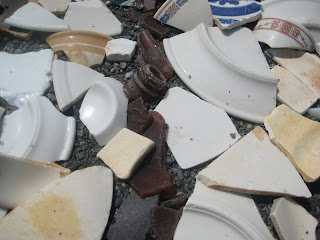 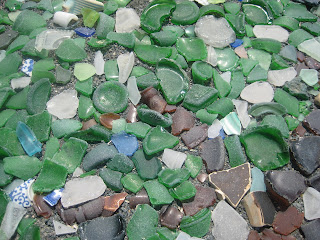 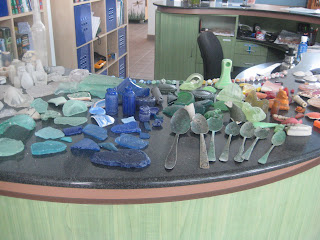 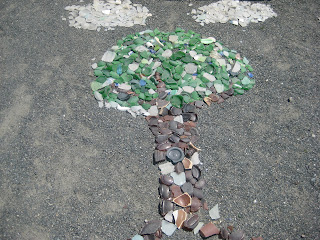 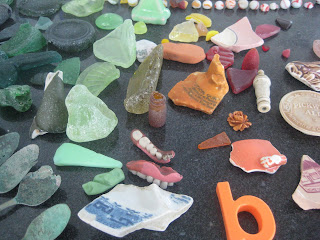 Making a Mosaic on Spectacle Island

If you’re looking for an oasis in the city of Boston, look no further than Spectacle Island. A short thirty minute ferry ride from Long Wharf will take you out of the busy urban life and onto the serene shores and sand with a view of the Boston skyline miles away.
We asked Ranger Cass what gave him the idea to create a free event that allows visitors to make mosaics from the pieces they find on the beach. “We have all of this cool stuff here,” he said, “Why not make something out if it?” He further explained that visitors are not allowed to take any of the sea glass home with them. Everything on the beach is a cultural or natural resource – Ranger Cass and the other rangers want people to appreciate it and leave it behind for others to enjoy, similar to any other national park.
“It’s the ultimate irony,” Ranger Cass explained, “that people are trying to take the trash and my job is to stop them.” These “sea glass poachers” as Ranger Cass called them would leave an empty beach behind if they were allowed to take the glass home with them.
We saw a lot of potential for Spectacle Island to grow as visitor’s and tourist’s spot. There is a swimming beach open and the rangers hope to have lifeguards soon. Although the landfill closed in 1959, the island was not clean enough to open as a park until 2006.
They say one man’s trash is another man’s treasure – and we see Spectacle Island as the ultimate example of creating treasure from the trash.
at 10:31 AM