This fall Save the Harbor/Save the Bay's President Patricia Foley was honored to receive the Henry L. Shattuck City Champion Award  for her service to our city its residents. (Save the Harbor also was also honored to receive the Gulf of Maine Council's Visionary Award, which you can read about here: http://blog.savetheharbor.org/2017/11/save-harborsave-bay-receives-visionary.html.) 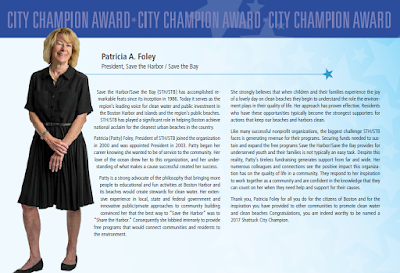 This year's City Champions Award recipients included Jay Hooley, Chairman and CEO of State Street, and Save the Harbor’s president Patty Foley, who was  honored for her excellence in leadership, her outstanding public service, and her commitment to improving Boston.

Here's the text of Patty's speech, which she delivered on September 19 at the Seaport Hotel. 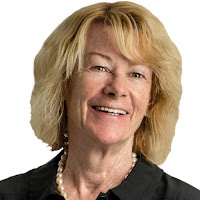 "Thank you to Bill Kennedy, Keith Motley and the Shattuck Awards Dinner Committee for honoring me and recognizing Save the Harbor/Save the Bay’s contributions to our city and all its residents, and Sam Tyler and the Boston Municipal Research Bureau for the work they do to strengthen our capital city.

Thanks as well to Jay Hooley, Henry Vitale, and all the men and women honored here tonight and thanks to all of you in this room for your commitment to our city and its success. There is no question in my mind that Boston is stronger today than ever before, thanks to your individual and institutional commitments.

I’d like to thank retired Chief Justice Albert Kramer of the Quincy District Court for the role he played in pointing me towards a career in public service, and the late great Congressman Joe Moakley and US District Court Judge A. David Mazzone and the men and women of the MWRA and BWSC for their commitment to clean water and our community.

For nearly half a century Boston has been led by mayors who envisioned a world class city with a world class waterfront. Mayor Marty Walsh and the Boston Planning and Development Agency have a bold vision for Boston’s future. I’d like to thank him and the City Council and the Boston legislative delegation for their support for Boston Harbor.

I’d also like to thank House Speaker Bob DeLeo, Senate President Stan Rosenberg and the legislative leaders and members of the Metropolitan Beaches Commission for their support for our advocacy on behalf of the metropolitan region’s public beaches from Nahant to Nantasket. Thanks to EEA Secretary Matt Beaton and to Governor Baker and Lieutenant Governor Polito for their support as well.

My late mother and aunt Patricia Powers Foley and Bridget Powers Holland were two strong and capable women and my earliest role models. My brother Tom, who is here this evening, our brother Michael, sister Lynne and I will always be grateful for their love and guidance.

In my career in politics, government and public service I have been privileged to have worked for leaders like former Secretary of State John Kerry, whom I served in the Lieutenant Governor’s office and the United States Senate.

Early in my career, I was also privileged to work for Paul Grogan, who made me a part of LISC’s leadership team as we worked to transform the community development movement into an industry that has strengthened American cities from coast to coast. Thanks as well for all you do at The Boston Foundation to improve the quality of life for Bostonians from every neighborhood in the city.

I would also like to thank Save the Harbor’s Board of Directors and our Executive Committee for their leadership, guidance and commitment, and our staff, who are passionate and effective in advancing our organization’s mission.

Finally, I would like to thank Save the Harbor/Save the Bay’s founding Chair Beth Nicholson, whose vision and dedication have made all that we have accomplished possible. I would also like to thank my partner in crime, our board chair Joe Newman of National Grid, who is smart, strategic and simply the best. I also want to thank my partner in life, my husband Bruce Berman who has helped lead Save the Harbor for 30 years, and loves this city and the sea almost as much as he loves me.

I was born in South Boston, and learned to swim at the Girls L, which is now the BCYF Curley Community Center.

As a young girl, the ocean and the beach were a source of joy to me as they are today as I tackle the challenges that come with my job, which is to restore, protect and share Boston’s extraordinary harbor with Bostonians from every neighborhood and the region’s residents and visitors alike.

Rather than a policy speech or a fundraising pitch, tonight I’d like to close with a short story about the work we do at Save the Harbor/Save the Bay.

I became president of Save the Harbor in 2000 as Boston Harbor and Mass Bay began to recover from generations of neglect. Since then, Save the Harbor has raised and invested more than ten million dollars to connect our neighborhoods and nearly 200,000 kids to the harbor we have worked so hard to restore and protect.

I am particularly proud of the impact we have had on the more than 200 Boston high school students who have worked for us in our free Youth Environmental Education Programs.

I am proud that so many of them spend two, three or even more summers working for us, and I am glad to keep in touch with them as they find jobs or go off to college.

Each year we invite them to bring their friends and families on our free fall cruises with Bay State Cruise Company. On a recent trip one of our summer staffers from Dorchester took a moment to thank me for inviting him on the cruise, and introduced me to his eight guests.

"I wanted them all to see why I love our harbor so much," he said with pride. "Thanks for teaching me that it belongs to all of us, and helping me share it with them today."

When we were founded in 1986, the thought that Boston’s filthy harbor, our decaying waterfront and neglected beaches would ever be seen as civic assets was a distant dream.

Thanks for sharing our dreams for Boston Harbor, and for helping to make them come true, and for honoring me and the organization that I have been privileged to lead for nearly 20 years."