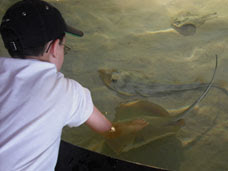 On Monday, we had our Staff Appreciation day. After some delicious hot dogs, blue fish, and grilled peppers, we headed over to the New England Aquarium. As soon as we got in, we headed straight for the "Sharks and Rays" exhibit we've heard so much about. As I've seen dozens of advertisements every day on my way to Harbor Explorers at Piers Park, I was very excited by what we were going to see. It turned out I was not disappointed. The aquarium had set up an enormous touch-tank, featuring animals like southern stingrays, bamboo sharks, and guitarfish (the "link" between sharks and rays). The rays felt really strange - it was almost like touching a jellyfish, except less squishy. Touching the sharks, on the other hand, was like petting sandpaper. Although a few kids around us were a bit scared to be touching "dangerous" sharks, they were all very tame and didn't seem to notice us petting them at all. We weren't able to stay for too long, however; the exhibit was extremely popular and 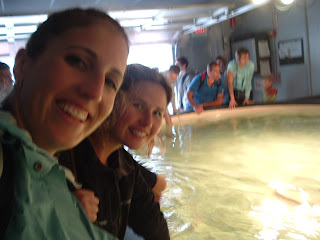 many more people wanted to get to the tank and touch the animals for themselves. What an awesome way to spend a rainy day!

We had such a great time! I loved learning about all sorts of jelly fish and being able to pet a shark.

Make sure when you make your visit to the aquarium that you check out the back deck with the Fur Seals and the Sharks and Rays exhibit! The jellyfish exhibit is also tricky to find but you won't want to miss it!