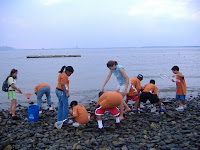 At Camp Harbor View, we had a competition between groups to see who could find the most crabs at low tide. Armed with dipping nets, we marched for the shore with buckets in hand to begin our hunt. The groups spread out on the rocky shore and looked under rocks for crabs. You need to catch them quick before they get away! 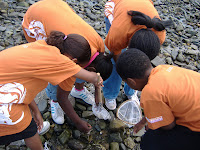 After about 20 minutes, most of the nets returned to the beach and the kids were chasing the crabs with their bare hands. Working as teams, one would move the rock while others tracked down the crabs to put in their team's bucket. The types of crabs we found were Asian Shore crabs, Shore crabs, Green crabs, and Hermit crabs. At the end of the day we tallied up the number of crabs and found that with both teams combined, the kids found over 400 crabs!

I would love to be at Camp Harborview having crab wars. That sounds like so much fun.