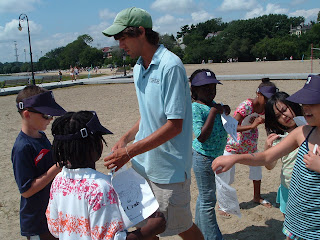 This past Saturday I had a great time at the Dorchester Beach Festival on Malibu Beach in Savin Hill. All kinds of groups showed up, from the New England Aquarium to the Coastsweep Program to the UMass Boston Volleyball team. I, along with Matt Nash from the Department of Conservation and Recreation, led a series of programs on the beach where we taught kids about the life cycles of harbor animals and how to conserve the Piping Plover. We had a great game set up where kids pretended they were plovers, and attempted to collect an amount of "food" in a time limit. Once they did it without interruptions, and once they did it with disturbances, such as kids playing frisbee, kids pretending they were dogs, or kids flying kites overhead. Each time the kids that were plovers were interrupted, they had to stop collecting food and run up the beach away from the shoreline, just like a real plover. Everyone learned that even though we might be doing things on the beach we consider to be fun, they can be destructive to plovers and might even lead to them starving. We also led kids in a scavenger hunt on the beach, where we found lots of dog whelks, surf clams, and even a horseshoe crab. Everyone there, parents included, had a great time learning about all the interesting animals they might encounter at the beach.