A Day at Georges Island 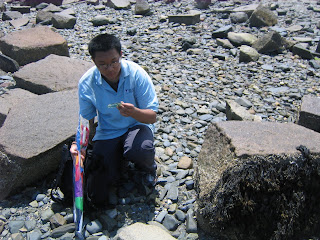 Hello, my name is Hei, and I work with Save the Harbor/Save the Bay as an intern from the ABCD Summerworks program. Last Friday, I was able to go with the All-Access Program to Georges Island once again. As usual, David began by explaining the rules on the island, and by describing the various types of activities that were available on the island. He suggested that everyone tried to do something that he/she had never done before. Although dark clouds loomed endlessly in the sunless sky, all the youths still seemed rather excited and optimistic.

After we arrived on the island and ate our lunches, we separated to proceed to our “stations” at different parts of the island. While Frankie and Jenny explored the beach with some youth groups, I went to one of the higher point near the beach to fly kites. Unfortunately, despite the gloomy weather, there was not much wind at all. (If it started raining, the wind would be strong, but the kites would have gotten soaked) I only had a few kites set up, because David has warned them ahead of time that the wind was weak today. Although I managed to get the kites up into the sky a few times, they would quickly fell back down after a short period of time. 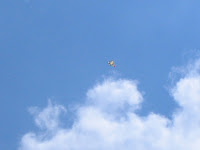 Most of the groups spent a majority of their times inside Fort Warren. When it is almost time to go, a few kids, along with their mentors, came by and tried to fly the kites. Although the kites did not stay up in the sky for very long, it was fun seeing the kids enjoying themselves with the kites. All we could do was to hope for a better wind next time when we came to the island again.
~Hei
at 2:12 PM