Save the Harbor / Save the Bay Releases Beaches Report Card 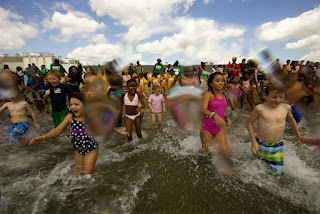 Save the Harbor / Save the Bay issued its first annual "Water Quality Report Card" on the region's public beaches from Nahant to Nantasket on Wednesday morning at 9:00 - 1-:00 the Exchange Conference Center on Boston's Fish Pier.

To assess and compare the water quality conditions on each beach, the group looked at the percentage of tests exceeding the state swimming standard of 104 cfu/100ml of Enterococcus.

"Some of the region's beaches, including Nantasket Beach in Hull and the South Boston beaches, are safe for swimming nearly every day and rank among the cleanest urban beaches in the nation" said Save the Harbor / Save the Bay's Bruce Berman.

"Many others are doing quite well.  However there continue to be pollution problems at some of the region's public beaches, including most of Wollaston Beach in Quincy, at Tenean Beach in Dorchester and at King's Beach in Lynn.  We need to address them all if we are to achieve the late Judge A. David Mazzone's often stated goal of beaches that are safe for swimming "Damn near every day!"

Last year Nantasket Beach in Hull was the "Gold Standard" for the metropolitan region's beaches, earning a 100% rating for beach safety. The South Boston Beaches came in a close second, averaging better than 98%. Tenean Beach in Dorchester and Kings Beach in Lynn each failed more than 20% of the tests performed in 2012.

The results were made public at the initial meeting of Save the Harbor's Beaches Science Advisory Committee, convened to conduct a systematic review of water quality and beach flagging accuracy on the region's public beaches from Nahant to Nantasket.

"Our goal is to help turn the data into information that people can use to make decisions," said Dr. James Shine of the Department of Environmental Health at Harvard University, who co-chairs the science committee along with Dr. Judith Pederson, a coastal resource specialist at the MIT Sea Grant College Program. "As scientists, we are here to focus on the facts," said Dr. Pederson. "It is Save the Harbor's job as an advocacy organization to build a consensus on how to address the situation going forward."

Berman, who teaches marine science and management at Boston University, agrees. "The scientists and technical advisors play a critical role in increasing our understanding of the causes of these problems, and can help us evaluate proposed solutions. But at the end of the day, this isn't just about the science, it is about our shared values and the love we have for these beaches."

By all accounts, the Deer Island sewage treatment plant and the Mass Bay outfall pipe have dramatically improved the health of Boston Harbor and Massachusetts Bay since they were completed in 2001. However, Berman noted that the first phases of the Boston Harbor Project were not intended to solve all of the problems that cause pollution on our region's public beaches. "The remaining problems need to be addressed on a "beach by beach" and "pipe by pipe" basis, as we did in South Boston with remarkable success" said Berman, "and that's exactly what we propose to do."

Save the Harbor / Save the Bay also asked the science committee for advice on ways to better protect the public’s health and access to clean water by improving the current beach flagging system.
"Posting yesterdays test results on the beach is simply not a sensible way to let the pubic know if it is safe to swim today" said Berman. "Most of our beaches deserve a fairly high grade, but I would flunk the red flags."

Here is a link to Save the Harbor / Save the Bay's 2012 Beach Water Quality Report Card
for the Boston Harbor Region's public beaches from Nahant to Nantasket.

Here is the data on which the report card was based, which was presented at
Save the Harbor/Save the Bay's Beaches Science Advisory Committee meeting
at the Exchange Conference Center on Boston's Fish Pier on Wednesday, May 30 2012.

Here is an Executive Summary of the results.
Here is the Data on which our report is based.
You can find a Press Release about the report here.

Here are two useful papers - on Antecedent Rain and
an analysis of posting based on the Previous Day's Results.

For insight into our values, view Save the Harbor's television commercial about beach flagging,
view our short video "Water Power" or visit our webpage at www.savetheharbor.org

If you have any questions, please contact Bruce Berman at
bruce@bostonharbor.com or by phone at 617-293-6243