Today, the amazing staff and I were invited to enjoy a beautiful day on Constituion Beach in East Boston. We were invited by the East Boston YMCA to their Summer kick off event. It was an excellent day to hold the event due to the weather since it was not too hot and not too cold. There were tons of activites on the beach for kids. We were able to be one of the numerous activities for the kids to enjoy during their day on the beach. 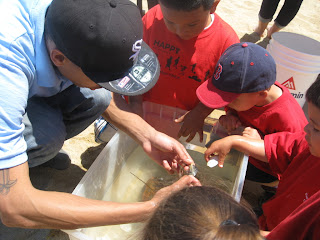 The Save the Harbor team had our friend Larry the lobster with us today, so that he could say hello to all the kids in East Boston. Some kids were afraid to even get close to him while others were completely fearless. The fearless children held Larry the lobster by his back in order to make sure they did not get pinched. Even though Larry may seem nice at times, I noticed that he could be a little be fiesty if you get too close to his claws or provoke him. However, today Larry did not pinch or hurt anyone and one of our staff members noticed he was missing a leg. He probably did not want to lose another leg, so I guess that is why he did not pinch anyone. 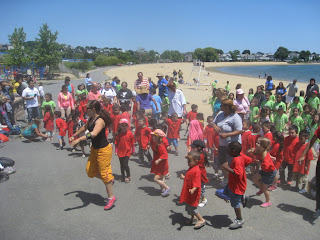 Overall, today at Constitution Beach with the East Boston YMCA was a great day that Save the Harbor enjoyed contributing to. The Flash Mob dance was definitely fun to participate in and watch. Also, tug of war was very interesting and exciting even though my side lost. That was fine with me though because the kids were very happy to beat people that were bigger than them. I had an amazing day in East Boston and cannot wait to go back there when Save the Harbor's summer programming officially starts. 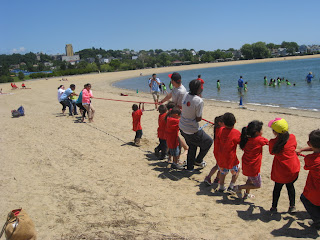 Labels: Constitution Beach, East Boston YMCA, Flash Mob, Larry the Lobster, Save the Harbor Save the Bay, Will Clark