“Blue Cross Blue Shield! Save the Harbor / Save the Bay! One Community! One Blue!”

﻿
Yesterday began with a rousing chant, as about 100 Blue Cross Blue Shield employees joined Save the Harbor / Save the Bay on Carson Beach in South Boston for a day of service.  The effort was part of Blue Cross Blue Shield of Massachusetts' Service Day, and this year marked the 75th anniversary of the company's service.  DCR's Jack Kelly welcomed the group beneath sunny skies and tasked us all with a variety of beach clean-up tasks. The group was divided up into eight different teams and quickly set out to various points along the beach to get started.


I had the privilege of joining “Team D”; we started near one of the beach walkways (on the Google Maps satellite image, it appears across from G Street), pulling everything but one particular plant, called Mayberry.  Don't worry - none of us knew what this was at first either!  A little research shows that Mayberry is more commonly known as Elliott's Blueberry, and is, as it sounds, a member of the blueberry family.1 In our work time during the morning, we cut back overgrown brush, weeded out sea grass and picked up trash among other things. I have to say, I think I was pretty lucky – my group was filled with enthusiastic, hard-working volunteers, and in their company, time flew by.


Among the many fascinating people I got to both work and talk with was Ronnie Bynoe.  Ronnie, from Weymouth and an avid beachgoer, was quick to describe her love of sharing the area with friends, suggesting that I do the same.  She touted the beaches as a great place to come and unplug (she leaves all her electronics in her car!), mentioning that “it's great place to take time for yourself.”
﻿﻿﻿﻿"People don't realize all the beauty we have in this state,” said Ronnie. “We don't take enough advantage of it.”
﻿
Team Leader Amy Dennett of Marshfield and Jamal Noshahi of Somerville were also among our group members. They have been with Blue Cross Blue Shield for 2 ½ years and 4 months, respectively, and work in several different capacities.  All in our group, including Julie, of Hull, who has been with Blue Cross Blue Shield in various positions for time totaling 8 years (!), approached our assigned tasks with gusto, and expressed their enjoyment of being outside and on the beach.
﻿﻿After lunch, we pulled the last few weeds out of our initial work spot, and then worked our way along the sea wall towards the north end of the beach, joining other groups to work on clearing out the massive amounts of sea grass there.  Just before 3PM, we headed back towards the bathhouse where we'd started the day, and listened to some closing remarks from Jack Kelly and Save the Harbor / Save the Bay's Matt Wolfe. As a part of the closeout, Blue Cross Blue Shield awarded a “Spirit of Service” Award to an employee who demonstrated the work ethic and level of service that the day aspires to achieve. I'm happy to say Ronnie was the recipient!! Check out this picture of her receiving kudos from team leader Amy in front of the whole group... 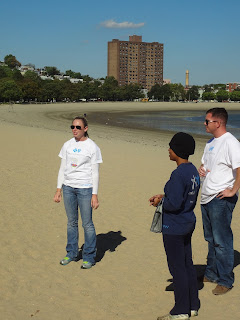 Overall, today was a great way not only to get to serve directly with Save the Harbor / Save the Bay and Blue Cross Blue Shield of Massachusetts, but also a really fun day in which I met some extremely engaging people and did impactful work. And now, I can't wait to do it again...


Congrats Blue Cross Blue Shield on 75 years of service! For more information on their community efforts, check out this page.

Megan Rawson
Development Intern
Save the Harbor / Save the Bay
at 11:11 AM