My Life and Crimes …Pulling Up Goldenrods on the Beach

On Tuesday I spent the day at Carson Beach committing what would be a crime in my home state of Nebraska!
I started the day by arriving at McCormick Bath House to welcome the Blue Crew from Massachusetts Blue Cross Blue Shield team. The whole team was pumped to help keep Boston’s beaches the cleanest urban beaches in the nation. I was also excited to help out so I picked a team who was assigned to clean out the beach grass that outlines the boardwalk. Not knowing what I was getting myself into, we grabbed our tools and gloves and headed to our site only to find the Goldenrod flower growing in every direction. 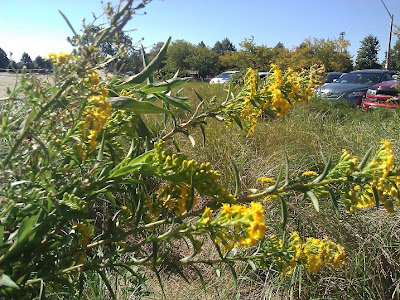 As I stood there to take in the view of the job ahead of us, I finally put two and two together. I realized that according to the directions of the DCR we were suppose to pull everything but the sea grass, which meant the goldenrod had to go. As a native Nebraskan this is task that I could be ticketed for if I were still living in the “Good Life” state. For those of you that don’t know, the Goldenrod is Nebraska’s state flower and is illegal to pick in the state.

So here I am on Carson Beach being asked to pluck this flower out of the ground and I realize how interesting it is. If the Blue Crew had been cleaning up a state park in Nebraska they would have been asked to pick everything but that flower whereas being in the state of Massachusetts it is considered a weed and invasive.Even though the Goldenrod is beautiful the Blue Crew made Carson Beach sparkle again. We all walked away with pride in the amount of work we accomplished and good cheer from being on South Boston's beaches for a day.

In addition to this weeks adventures it is also the week that I say good bye to Save the Harbor. I had an amazing summer and learned more about the harbor and its importance than I would have anywhere else. I would like to thank everyone that work at Save the Harbor, especially Bruce and Patty. You guys were awesome, a great support, and provided a wonderful introduction to the city of Boston. Thanks again  and I hope to see you out on the harbor soon! 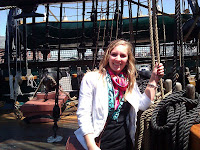 -Liz Allen
Events/Communications Intern
at 10:06 AM