Hooked on a Feeling

Boston, where the first American lighthouse was built in the harbor in 1716. The harbor an essential part to the city of Boston for tourists and residents. While scrolling on Instagram, I came across the Save the Harbor Save the Bay page and I was instantly interested in their programs and philosophy. I saw that the organization was hiring for a summer Senior Harbor Educator position, my expertise with children and high school students encouraged me to apply. 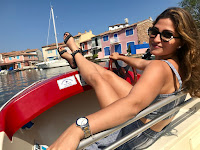 I was offered the opportunity to work for Save the Harbor Save the Bay, an organization that is the leading voice for clean water in the region. I moved to Boston from Chicago to work as a Senior Harbor Educator. Back home, I devote a large portion of my time to Best Buddies and I work with children who are on the autism spectrum. I have always had an interest in marine and environmental studies but never had the courage to apply to a position that wasn't my speciality. The first week of orientation changed that for me. 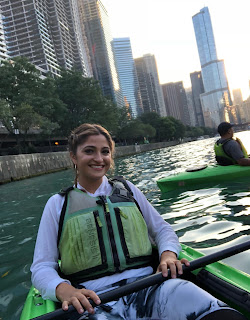 Orientation, the night before jitters began, thousands of question and worries that I had before my first day (i.e. I don't know how to fish, never met any of the staff before...) On Monday, we met as a team I was kindly greeted by Kristen, Bridget and the rest of the staff that I would be spending my summer with. Everyone was friendly and enthusiastic, those jitters and worries immediately went away.
Once we got onto to the boat, I realized that- what an opportunity this is, an honor for me to be at SHSB. We made it to Spectacle Island which was interesting to learn how it was a landfill. The story behind it really taught me something, that if there's a group of people that want to change something they could with persistence and patience, once a landfill; now a beautiful beach to swim and hike at. I was hooked on a feeling and I knew that this summer position was off to a great start. There is nothing better than a job that allows you to learn and work simultaneously.

At Spectacle Island, we played this magnificent “Shipwreck” game that tested our ability to listen to directions closely and bond with our peers. I would have to say that was my favorite part of orientation. 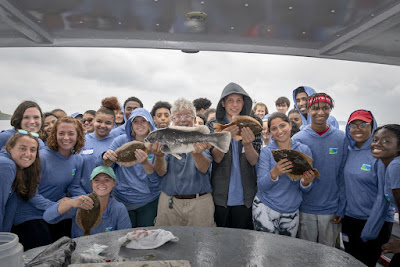 The second day of orientation was all about FISHING. A sport I am not familiar with, but was able to "catch" on quickly. I touched a sea worm- which hands down is the ugliest creature I have came across, it bites, squirms and is hairy. I learned how to to tie a knot and put bait on a hook. I didn't catch a fish, but I held one! (FLOUNDER MAN). Now, I will enjoy fishing because the staff and peers made it an amazing time. Seeing the students get thrilled about catching a fish and not having to use their phone to have a good time gave me a great feeling. In a world of technology, seeing teens enjoy their peer's company and not being glued to their phones is an exceptional thing to see!

I know this summer will teach me more about marine life but I am positive that this experience will impact me and change the way I look at patience, persistence and enjoying the moment I'm in.