At Save the Harbor/Save the Bay we have learned that one of the best way's to Save the Harbor is to Share the Harbor with the public with free events, excursions and programs that connect kids and families to the harbor, the beach and the islands we have worked so hard to restore and protect

This summer, Save the Harbor is launching our new Share the Harbor initiative, which includes 10 free harbor cruises throughout the spring, summer and fall!

The program for these cruises is based on the songs and stories of the sea that we developed with a team of historians, authors, storytellers and song leaders in order to share the diverse maritime history of Boston and America. The schedule includes trips to Georges and Spectacle Island, Boston Light, the site of the first lighthouse in America, and more. This summer, both youth and adults will have the chance to connect to the sea by learning about its history as well as the opportunities and challenges we face at present and our role in addressing them. 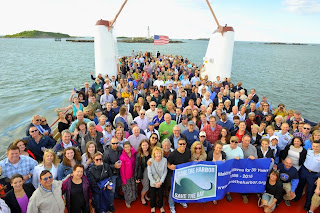 Save the Harbor has always believed that part of our mission to save the harbor is to share the harbor. This spectacular urban natural resources belongs to all of the region’s residents, but for a variety of reasons not everyone has felt that connection to the water. That is why Save the Harbor first created its Haul Away Together curriculum, and why we are even more excited to announce this expansion of the program in 2018.

In addition to taking people on the water, Save the Harbor will host three landside talks in communities along Boston Harbor. Historian and Author Eric J. Dolin, Ph.D who collaborated on the creation of the Haul Away Together curriculum, and who will be speaking at some of the events, is eager to share this history with the community. “Introducing the region’s residents to Boston’s rich maritime history will not only excite them and increase their love of history, but it will also give them a visceral connection to the past – a past in which people like them played a significant role,” he said. “And best of all, when they gaze out upon the harbor, and think about all the untold number of ships and mariners that have sailed into and out of Boston over the centuries, they will feel more connected to them and the history that they represent.” 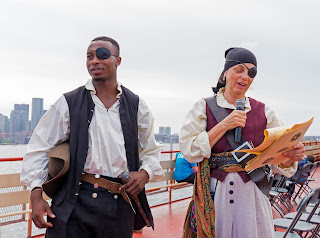 Cruises will take place from June to September, and are free and open to the public. “We have seen an ever increasing demand for affordable access to the harbor and the harbor islands over the years,” said Bruce Berman, Director of Strategy and Communications for Save the Harbor. “That’s why we are so excited about this new initiative. Not only will we be able to bring more adults to the water than ever before, we’ll be telling the story of the Harbor in a whole new way.”

The first Share the Harbor cruise is the trip to Boston Light, and will take place on June 25th. Eric Dolin will join Save the Harbor's resident pirates and storytellers to offer wheelhouse narration based on his book “Brilliant Beacons: A History of the American Lighthouse”. This after work cruise begins boarding at Bay State Cruise Company's World Trade Center dock in the Seaport (200 Seaport Blvd.) at 5:30 for a 6pm cruise. You can reserve your spot here.

Share the Harbor is funded in part by Mass Humanities, which receives support from the Massachusetts Cultural Council and is an affiliate of the National Endowment for the Humanities.