On Monday June 18th the Metropolitan beaches Commission hosted a hearing at the State House, featured testimony by Department of Conservation and Recreation (DCR) Commissioner Leo Roy, and Mayor Brian Arrigo of Revere and Mayor Thomas Koch of Quincy to testify. 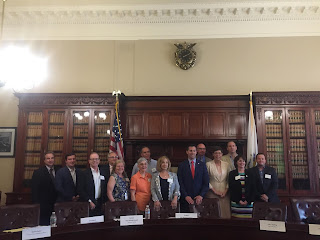 Members of the Metropolitan Beaches Commission met at the
Massachusetts State House for a hearing on June 18th.

The meeting opened by welcoming Senator Brendan Crighton to his new role as Senate Co-Chair of the Commission, after having long served as a Commissioner when he was a member of the House. The Co-Chairs also welcomed three new Commissioners, Dan Kenary, CEO of Harpoon Brewery, Edward M. Lambert of UMass Boston, and Jason McCann, Secretary of the Hull Planning Board.

DCR Commissioner Roy was the first to testify before the Commission, opening by reiterating DCR’s mission to protect, promote, and enhance our Commonwealth’s natural, cultural, and recreational resources for the well-being of all, highlighting the reality that these resources including the metropolitan beaches are year-round resources. He called it a “fantasy” that beaches are only used in the summer. He also emphasized the DCR’s commitment, when it comes to access for all, to ensuring accessibility for persons with disabilities.

He then discussed funding issues, beach staffing, the winter storm damage, the importance of partnerships, water quality testing, and the anniversary of the founding of DCR. According to Commissioner Roy, DCR spent $1 million on operations for the metropolitan beaches in the last year, $600,000 on capital equipment to support beach operations, and $11 million on infrastructure improvements, much of it for improvements to Winthrop Shore Drive. In terms of staffing plans for the coming year, Roy said that the metropolitan beaches will be fully staffed, at the same levels as last year. Commissioner Roy took time to note how proud he is of the lifeguard program, which has trained 600 new guards, 116 of whom will be dedicated to the metropolitan beaches this summer.

This winter was a particular concern for the Commission, with the three storms in March of 2018 having caused significant damage. Commissioner Roy reported that so far DCR has completed $300,000 in damage repairs and the work is not done. DCR is pursuing federal funds to reimburse as much of those costs as possible. The Commissioner also discussed DCR’s partnership matching funds program. He discussed how this program builds strong relationships between local individuals and nonprofits and their parks and is an important part of maintaining our parks and beaches.

Finally, he discussed water quality issues noting that we have consistently high quality beaches that we can be proud of. He acknowledged that there is still work to be done at King’s Beach and Tenean Beach, and discussed the flagging system for beaches that might fail a water quality test, but that overall the beaches are clean and ready for use. On this note he also briefly discussed the process for algae removal at King’s Beach, saying that removal is underway for the year and that so far they have been able to stay ahead of hit. He noted that the most expensive part of the program is the disposal of the algae, and that DCR continues to investigated closer locations than New Hampshire to make the program more efficient.

He concluded by remarking that this year marks DCR’s 125th birthday, and noting a few of the ways that today’s DCR is working to continue the legacy of Charles Eliot and Sylvester Baxter, who pushed for the creation of the first regional preservation parks system.

Commissioner Roy then engaged with Commissioners on a number of issues, both general and community specific. Regarding the matter of long-term funding plans, particularly in the face of the increased likelihood of a repeat of last winter’s storms, Roy told the MBC about a new asset management software that DCR is populating with data on all of all of the assets that DCR owns and their current state. In discussing the $350 million included in the Governor’s recent bond bill dedicated to park maintenance and infrastructure, Roy acknowledged that the DCR faces more than $1 billion in deferred maintenance needs across the Commonwealth. The asset management software is intended to allow for a comprehensive assessment of all DCR’s resources in order to begin to tackle that issue. Further questioning brought up the issue of level funding for the coming year and if it will be sufficient. Roy assured the Commission that through strategic reallocation of staff needs will be met on the metropolitan beaches with the same level of funding as last year. He also mentioned how important to the partnership program is when it comes to supplementing existing staffing and funding.

He also answered questions about issues in Revere, including historical preservation needs, and the imminent construction of a long-awaited restroom facility; erosion concerns at Constitution Beach in East Boston; recently completed infrastructure improvements in Lynn and remaining needs regarding handrail repair and replacement, as well as the algae removal process at King’s Beach; and finally the on-going balance, as Commissioner Roy put it “between the C and the R” on the region’s beaches when it comes to piping plover conservation efforts and the people who use the beach for recreation.

Mayor Arrigo of Revere then testified, emphasizing the success of the partnership between the City, DCR, and the MBTA, made visible most recently not only in the renovated Wonderland Blue Bine station and new pedestrian footbridge directly connecting it to Revere Beach, but also more generally in the revitalization of Waterfront Square. He also updated the MBC on the restroom construction project in Revere, saying that he expected a construction contract to be signed very soon and for groundbreaking to begin shortly. He concluded by noting the imminent threat of climate change, and the need to work creatively to garner the financial resources necessary to address all of the issues raised at the hearing.

Mayor Koch of Quincy also discussed the successful collaboration with DCR from facilities maintenance, to Quincy Shore Drive and the winter storm recovery process. He discussed how the City of Quincy has been improving drainage and sewer systems to improve water quality and Wollaston Beach is truly a premiere beach on the south shore for people from all over. Given this, he noted the need for increased investment in raking and waterfront infrastructure.

Bruce Berman of Save the Harbor/Save the Bay provided a quick update on the better Beaches program, funding for which is provided by in part by the state. Having received the support of the House, Senate and Governor last year, Save the Harbor was able to give away more than $200,000 this summer. The House and Senate have concurred on the same funding for the next budget, and we await the Governor’s decision once the budget has been sent to his desk. Bruce also discussed the Water Quality Report Card, mentioned in DCR Commissioner Roys presentation. He stressed that the 5 year average is the number that communities should pay the most attention to, as a single year with more or less rain than average can be an anomaly. Finally, he updated the Commission on progress that has been made through the Beach Science Advisory Committee on next steps for King’s Beach in Lynn, and announced that the BSAC will be opening a process for Tenean Beach this year.

In closing statements, all commissioners expressed appreciation for the hard work of MBC staff, DCR, partners, and others to keep these beaches in great condition, and reiterated Commissioner Roy's statement that these beaches are truly year-round assets and that more needs to be done to recover from the winter storms. Commissioner Paul Nuting from Dorchester brought to the Commission's attention a beach that needs increased resources as it experiences increasing use particularly from new residents. Commissioner Barbara Bishop from Winthrop highlighted the completion of various improvements at Winthrop Beach in time for a new summer season. Finally Senator Crighton closed the meeting by saying that the Commission looks forward to hearing more about DCR's new asset management program and discussing how to ensure transparency in that process for MBC communities.
at 12:41 PM