The Save the Harbor/Save the Bay team joined Coca-Cola of Northern New England in a joint effort to clean up Carson beach, on June 23rd.

The rain held off, allowing the early morning volunteers to pick up litter along the shoreline and walkways for nearly three hours!

DCR staff supplied the team of over 20 people with trash pickers and garbage bags, and helped to haul away the bags once filled. 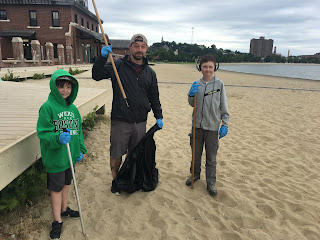 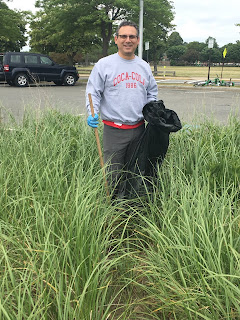 Many Coca-Cola staff brought along family members, getting their kids involved at a young age with beach preservation efforts.

“As a resident of South Boston, this clean-up day was even more meaningful to me than it otherwise would have been, and I know I can say the same for our associates and their families who pitched in. Coca-Cola has over 500 employees in greater Boston, and, just like everyone else, they enjoy visiting area beaches with their families during the summer,” said Nick Martin, Director of Public Affairs and Communications for Coca-Cola of Northern New England. “Partnering with Save the Harbor/Save the Bay was a truly rewarding way to give back to the community that we’re fortunate enough to be a part of.”

A four-legged friend also helped out, offering up lots of tail wags and licks for morale.

The energetic team made it down the entire stretch of beach, clearing away numerous bagfuls of bottles, plastic bags, cigarette butts, and other litter.

“This beach is really a gem not only for Bostonians but for the region as a whole,” said Chris Mancini, Vice President of Operations and Programs at Save the Harbor/Save the Bay who led the group. “We have the cleanest urban beaches in American and Carson Beach is one of the cleanest in the region. We’re incredibly grateful to Coca-Cola of Northern New England for their partnership in helping to preserve and protect this resource for everyone to enjoy.”

Thanks so much to Coca-Cola of Northern New England and the DCR for joining us this weekend to keep our beaches clean!
at 1:49 PM