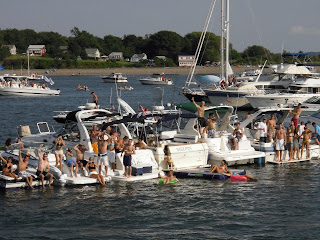 Ross here with lots to fill you in on. First of all this past Saturday my brother and I helped Matt and Janet put on a smooth Sound Waves/Aquapalooza. We hung some Save the Harbor Save the Bay banners up all around the boat and had a great time listening to the bands and watching the boaters having a blast!
Secondly I want to say that the first fish after switching sites with Jason was finally caught this Monday at Camp Harbor View. It was a fairly large flounder that was caught on the very tip of its lip. This got all the kids talking and excited throughout the camp. 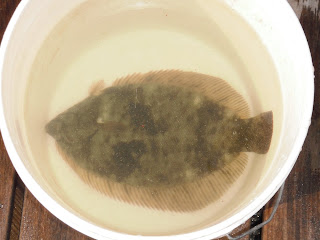 We've been catching tons of crabs during low tide and putting on lots of sun block since we have finally had a stint of great weather.
The week has gone by very smoothly including a great scavenger hunt competition in Dorchester. We had two teams timed with 16 items to find and take a picture of, draw, or write down.
Finally today we had a smaller crowd of kids at camp harbor view for the fishing so we went out on the boats to fish a little deeper. LOW and behold... we reeled up a good old skate. It seems like these sea worms are doing their job and we're hoping to keep it going in the weeks to come.

With proof of possible success comes ambition and determination